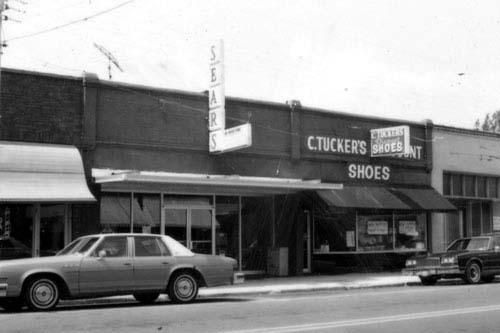 Charles “Charlie” Tucker (1886-1958) was born in Russia to Jacob and Raella Tucker. In 1890, the Tuckers immigrated to the United States, settling in Baltimore, Maryland. By 1914, Charles had moved to Kingstree, South Carolina, where he opened a dry goods and clothing store, C. Tucker, on East Main Street. He quickly became one of the most respected merchants in South Carolina’s Pee Dee region, opening other dry goods and clothing stores on Academy Street and in Lake City. In addition to his own mercantile activity, Charles brought Jews from Baltimore to South Carolina, helping them get their start as merchants by allowing them to work in his stores and learn the business. These fledgling Jewish Merchants often relied on the Baltimore Bargain House, a mail-order wholesale business that became a hub for Southern Jewish Merchants and extended credit to purchase inventory. Around the time of Charles Tucker’s death in 1958, he passed the business on to his son-in-law, Thomas A. Blakely Jr. (1925-2013). The North Academy Street store is listed in the National Register of Historic Places. Above Image: Reprinted from The County Record, February 28, 1918. Above Image: Thomas A. Blakely Jr. (1925-2013). Image from https://williamsburgfuneralhome.com/obits/tab/index.html.