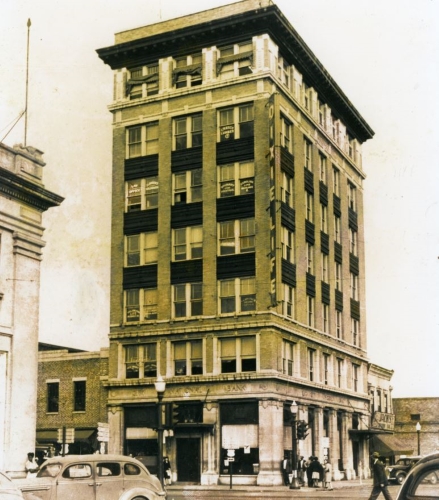 Jacob “Jack” Adelsburg (1895-1965) immigrated to the United States from Poland in 1911. After he arrived in the United States, Jack remained in New York City through at least 1917, where he worked as an embroiderer. Following service in the Army during World War I, Jack moved to Mayesville, South Carolina, where he worked as a salesman in Abraham “Abe” Mazursky’s (1892-1970) dry goods store, The Beehive. Around 1923, Mazursky moved to Sumter, South Carolina to open the department store The Hub, leaving Jack behind to manage the Mayesville store. Around that time, Jack married Polish immigrant Esther Koletski (1895-1969). By 1929, the Adelsburgs moved to Sumter, where Jack opened Jack’s Department Store. Soon thereafter, the store relocated to the Dixie Life Building at 3 North Main Street in downtown Sumter. Esther worked as a clerk and later as a buyer for the store. Jack’s brother, Mejlech “Max” Edelsburg (1906-1975), and sister-in-law, Tauba “Toby” Lee (Lewin) Edelsburg (1904-1981), came to Sumter from Szczekociny, Poland in 1935. They also worked in the store, with Max becoming a partner in the business. After Jack retired in 1949, Max and Abraham “Abe” Stern (1929-2021) took over operation of the business. Stern, who was born in Lodz, Poland, immigrated to the United States after surviving the Holocaust, and married Max’s daughter, Rhea (1928-2012), in 1950. Max and Abe later expanded the Jack’s brand, renamed Jack’s Name Brand Discount Shoes, opening stores in Columbia, Florence, and Charleston. In 1970, two years before the demolition of the Dixie Life Building, Jack’s Sumter store relocated to 337 West Liberty Street. Max remained involved in the operation of the Sumter store until his death in 1975. Thereafter, Stern ran the store until the 2010s, when he retired and sold the business to longtime employee Darrell Thompson. Jack’s Sumter store closed in 2017.