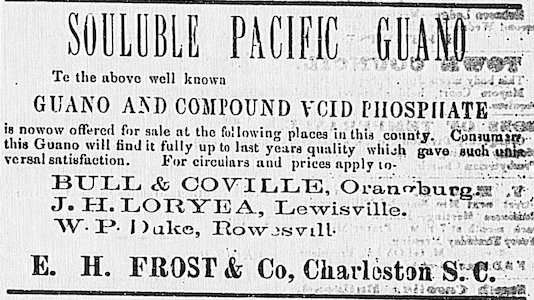 Joseph Loryea (1848-1929) was born in Sumter, South Carolina to Russian immigrant Aaron Loryea (1821-1911) and English immigrant Jane D. Hart (1825-1895). Around 1850, the Loryeas moved to Charleston, where Aaron worked as a tailor and later as a merchant. In 1870, the Loryeas were living in Orangeburg, South Carolina, where Joseph worked as a clerk in his father’s dry goods store. Around 1875, Joseph went into business for himself, selling agricultural products like guano and phosphate. In 1878, he joined Polish immigrant Jacob Sorentrue to open Orangeburg’s California Store, which sold groceries, clothing, dry goods, and lamps. In 1879, Sorentrue bought our Joesph’s portion of the business. Soon thereafter, Joseph became employed as a fire insurance agent.

Main Image: An advertisement mentions Joseph Loryea as a dealer of guano and phosphate. Reprinted from The Orangeburg Times, June 9, 1877.