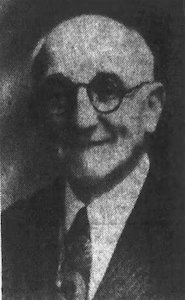 Louis Lyon (1872-1961) was born in Baltimore, Maryland to British immigrants Reuben (1835-1882) and Deborah Kalisher Lyon (1840-1893). His father worked as a jeweler and his mother kept up the house. As a boy, Louis’s father passed away, leaving his mother or his older brother, Solomon (1860-1946), to provide for Louis and his numerous siblings. Around 1889, Louis left home for Sumter, South Carolina, where he secured employment with general merchandise store J. Ryttenberg & Sons. For the next five decades, he worked as a dry goods and clothing salesman, buyer, and manager for various Sumter businesses, including, The Ladies’ Shop of Sumter, R. L. Edmunds, and The Economy Store. He also served as a bankruptcy trustee for many Sumter businesses, overseeing the liquidation of their inventory to help pay their debts. Around 1940, Louis founded apron manufacturer Debbie Lynne Apron Co. from his home at 219 West Hampton Avenue. He would operate that business for the next twenty years or so.