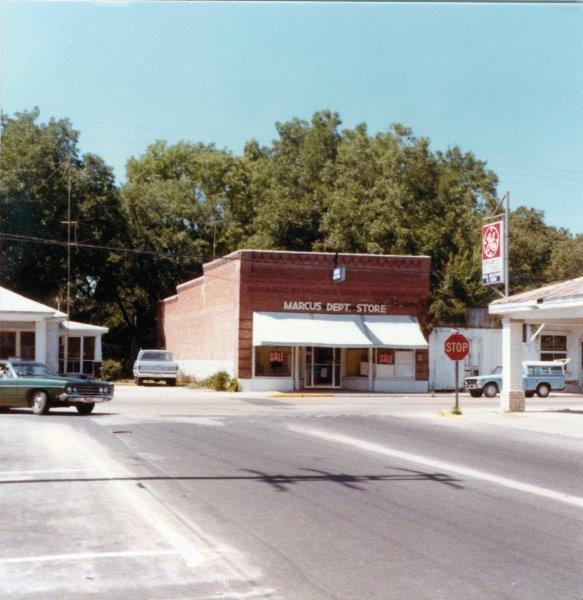 Morris died of cancer at the age of 35, leaving Janie to manage the store, which she did for more than 40 years. By 1920, Janie, Harry and Hymie were living with the family of her sister, Katie Cohen Karesh, as well as a boarder, Samuel Zaks, on Porcher Street. Both the Kareshs and Zaks ran stores in town, and the Marcus and Karesh children grew up working in them. Zaks, a Russian immigrant, also presided over Passover seders, which were attended by relatives from South Carolina, New York and Florida.

Ernie Marcus recalls memories of Eutawville passed down from his father, Harry Marcus: “Dad sometimes told me stories of his life in Eutawville as a kid. There was an old artesian flowing well downtown which served townspeople, as well as mules and horses. The large trough was a place where everyone socialized during the day, including playing checkers made out of bottle caps, just a few steps from Marcus Department Store. At night Dad used to sneak down there with friends and, after washing the trough down with soap, they’d go for a bath. Nearby were seven natural springs in limestone rock formations next to the Santee River, called Eutaw Springs. This was a favorite watering hole for all the kids in town.”

Harry Marcus attended the University of South Carolina for one year before returning to help run Marcus Department Store. Together, he and his mother sent Hymie to college. Hymie graduated from medical school and moved to Orangeburg, South Carolina, and opened a practice. Harry remained in Eutawville almost his entire life, except for a period in the 30’s when he lived with Cohen relatives in New York City where he worked as a telegraph operator (along with several cousins) at Western Union. During World War II he enlisted in the Army Signal Corp where he served in the Pacific theater. Following the war, Harry returned and married Louise Levi (1913-1995) of Abbeville, South Carolina. Louise was a graduate of the University of South Carolina. She and her sons, Arthur and Robert Berger, moved to Eutawville and moved briefly into the old Methodist parsonage on Porcher Street, immediately adjacent to the family house where the surviving Kareshs and Janie Marcus still lived.

In addition to managing Marcus Department Store, Harry Marcus served as the mayor of Eutawville for 23 years, where he oversaw expansive civic improvements, including the construction of a new public health center, the formation of a volunteer fire department, and the installation of a 75,000-gallon water tank to serve all of Eutawville’s residents. The latter is sometimes called “Harry’s Monument.”

After Janie Marcus passed away in 1962, Harry and Louise modernized the store, which Ernie remembers as selling “everything from costume jewelry to overalls to Easter hats to Converse sneakers and patent leather children’s shoes, all oriented to a primarily African-American customer base.” Their children all found career success outside of Eutawville, and so Marcus Department Store closed in 1985 following Harry and Louise’s retirement.