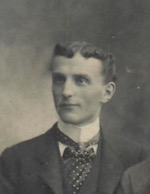 Harry Leon Schlosburg (1877-1940) immigrated to the United States from Russia around 1896. Upon his arrival in the United States, Schlosburg moved to Camden, South Carolina, where he would eventually establish a successful department store. In 1899, Harry married Anna Karesh (1878-1946) of Branchville, South Carolina, with whom he would have four children. Around 1902, Schlosburg partnered up with his uncle, Sol Liebman (1871-1937), to found Schlosburg & Liebman Bros. Dealers in general merchandise, the pair operated stores in Camden and Cheraw, SC. In 1903, Liebman and his growing family moved to Bristol, Virginia. Schlosburg worked on his own until 1910, when he entered a business partnership with Sam Goldberg, a merchant from Augusta, Georgia. The pair bought merchandise from merchants across the state who were either looking to retire or facing bankruptcy. As they bought the merchandise at discounted rates, the business was most likely a lucrative one. Schlosburg continued to work with Goldberg until around 1912. Around that time, he opened his own dry goods store in Camden. The store did well, and soon expanded to become a department store. Building on the success of his Camden store, Schlosburg opened a branch store in Chester, SC in 1916. Like his store in Camden, the Chester store also did well, and it grew to become a department store in 1924. The Chester store closed around 1930.