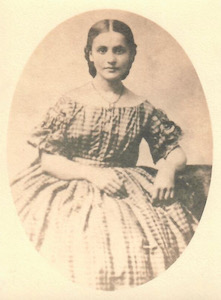 Born in the village of Gorzyce, Galicia in 1835, Simon Fass (1835-1897) immigrated to the United States as a young man, arriving in New York City in 1855. Soon thereafter, he moved to Charleston, South Carolina, where he married Prussian immigrant Henrietta Jacobosky (1845-1893) around 1862 (Henrietta was born in Schneidemühl, Prussia, present-day Piła, Poland). By 1866, Simon opened a dry goods and general merchandise store at 541 King Street. The store also served as a home for their expanding family, which by 1880 included six children and Henrietta’s mother, Emma Jacobosky (1816-1892). Besides catering to Charleston residents, the store also served merchants from across the county, many of whom would stop there to restock. From 1879 to 1883, Henrietta appears to have been in control of the store, as city directories from those years list her as its operator and Simon as a clerk. In 1884, Simon resumed management of the store. Sometime in the mid- to late-1880s, the Fass family moved their store and residence a block away to 483 King Street. Around the time of Henrietta’s death in 1893, Simon closed the store. Thereafter, he worked as a merchandise broker until his retirement in 1897.1 After Simon closed the store, his son, Israel I. Fass (1871-1937), opened a clothing store at the location. Israel relocated his store to 473 King Street in 1897.