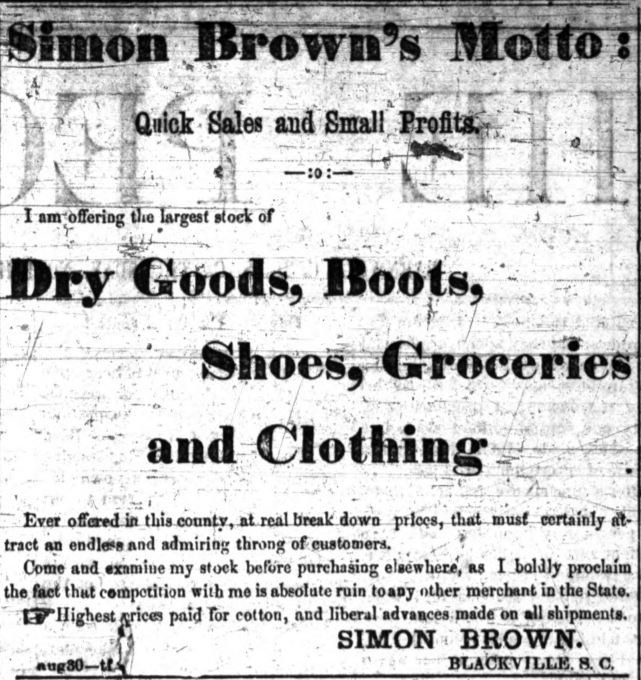 Around 1850, Simon Brown (Braun) (1829-1906), who was born in Warsaw, Poland, immigrated to the United States with his wife, Philapena “Pena” Asher (Aschen) Brown (1829-1918), who was born in Filehne, Germany (present-day Wieleń, Poland). The Browns initially lived in New Jersey, where Pena’s brothers resided, “but left the state after Simon became involved with anarchists. For reasons unknown, the Browns chose to settle in Blackville, which by 1878 was home to approximately 40 Jews.” According to the 1860 Census, Brown worked as a “boot and shoe maker” and owned no real estate. According to the 1870 Census, however, Brown worked as a “Dry Goods Merchant” and owned $7600 in real estate (about $160,000 in 2022 dollars), a clear indication of his success. According to one descendant, Brown “owned slaves in the years before the Civil War,” and “by the time of his death in 1906, he had acquired 5,000 acres.” During the 1870s, Madison J. Marcus (died 1897), a Prussian Jew, joined Brown in his business. Together, they sold an extensive variety of goods, ranging from boots and hardware to furniture and perfumes. To encourage local farmers to visit their store, Brown and Marcus purchased cotton at the “highest prices paid,” which they then resold to larger textile companies. This practice of buying and selling cotton to attract customers and increase profits was not uncommon in southern agrarian communities during the latter half of the nineteenth century. In 1881, Marcus left Brown to start a saddle, draft, and livestock business in Blackville. The following year, Brown’s sons joined the family business, and its name changed to Simon Brown & Sons. In 1883, however, Brown returned to selling goods under his own name. Above: Simon Brown advertisement. Reprinted from The People, October 18, 1877. This advertisement’s reference to the United States declaration of war against Mexico refers to the San Elizario Salt War, see https://en.wikipedia.org/wiki/San_Elizario_Salt_War.