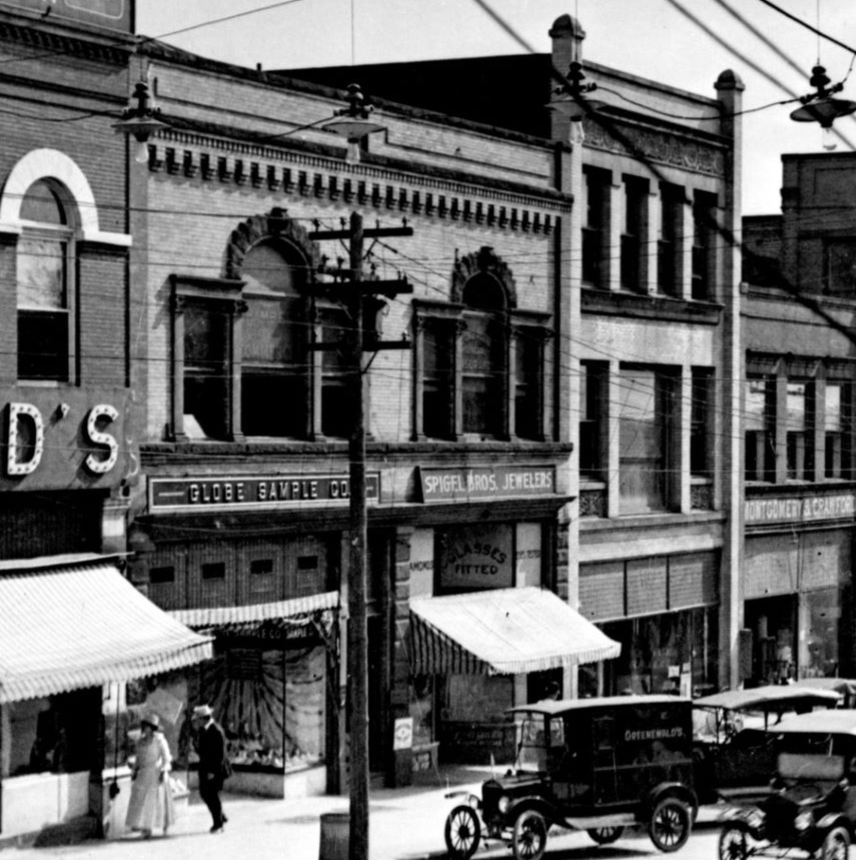 Brothers Daniel M. Spigel (1867-1949) and Joseph Spigel (1866-1937) were both born in Kremenits, Russia (Ukraine). The brothers immigrated to the United States in 1889 and initially peddled goods in the Midlands. By 1900 Joel Spigel was living in Spartanburg and working as a jeweler. After David Spigel joined him, the brothers opened Spigel Bros. Jewelers by 1905 at 56 Morgan Square. The business advertised the Spigels as both jewelers and opticians. The brothers moved the business across Morgan Square to 111 W. Main by 1908, where they remained until 1924. Joel, who never married and lived with his brother for his entire life, served as president of the Temple B’nai Israel when the synagogue on Dean Street was built in 1917. David Spigel married Daisy (c. 1881-1957) and had two children, Dena and Julian Spigel. The business moved to 115 W. Main in 1926 and evolved into a real estate company, also called Spigel Bros Real Estate, which opened by 1929.

Main Image: Spigel Brothers, seen here on W. Main Street in the 1920s, was one of several Jewish-owned businesses on this block. Note the signage stating “Glasses Fitted,” indicating that the store also had an optician, likely David Spigel. Image courtesy of the Herald-Journal Willis Collection, Spartanburg County Public Library Advertisement for Spigel Bros. printed in the January 1, 1910 issue of the Spartanburg Herald-Journal.