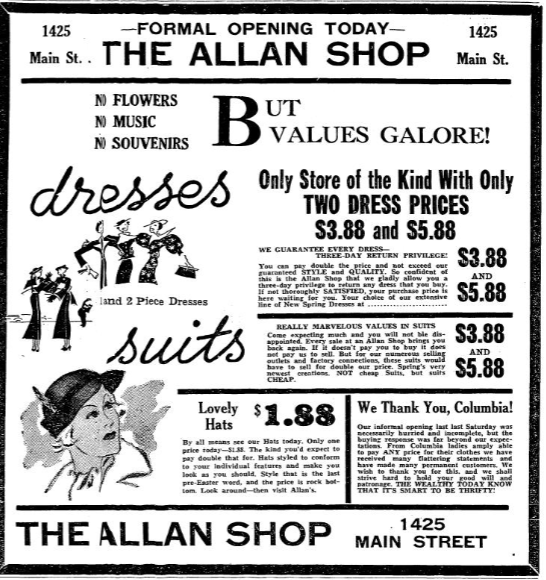 David Gould (1886-1944) immigrated to the United States from Milner, Poland in 1909, settling in Oklahoma. By 1920 he was managing a dry goods store in Okmulgee, Oklahoma, and by 1930 he was working as a ready-to-wear clothing merchant in Oklahoma City, Oklahoma. Around 1920, Gould married Rebecca Ammerman (1881-1960), an immigrant from Kiev, Ukraine, with whom he had three children. By March 1935, Gould had moved to Columbia, South Carolina where he opened women’s clothing and accessory store The Allan Shop at 1425 Main Street. Later that year, he relocated the store to 1619 Main Street. Shortly thereafter, it became known as simply Allan’s. After he became ill in 1943, Gould passed the business on to his daughter, Sara Gould Picow (1913-2007), and son-in-law, Edward I. Picow (1912-1970). During its time at 1619 Main Street, Allan’s was remodeled several times, and ultimately expanded to include 1621 Main Street. A year after the death of Edward I. Picow, Allan’s was foreclosed. Sara Picow later moved to Austin, Texas, where she owned and operated David’s Station Clothing from 1973 to 1981.