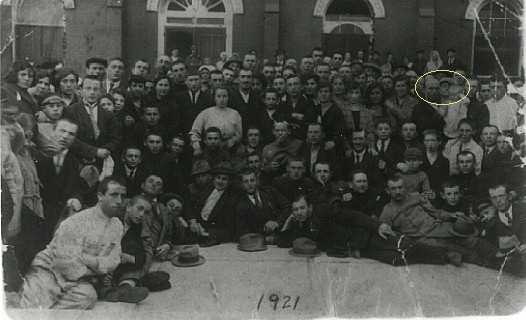 Morris Drucker (1904-1992) was born in Kartuz-Bereza, Russia (present-day Biaroza, Belarus) to Mayer Drucker (1849-1934) and Toby Malke “Tillie” Borshaw (1865-1941). In 1914, German soldiers invaded his village, killing people and livestock. Drucker’s “early teens coincided with the Bolshevik Revolution. When Russian Czar Nicholai was executed, the country was thrown into even more turmoil, despair and hard times. At that point, Drucker, along with his parents, a sister, brother-in-law and niece, decided to leave the country and join relatives in the United States.” The Druckers passed through Ellis Island in 1921, and joined relatives in McCormick, South Carolina. There, Drucker “became known as the ‘Baby Peddler’ because he traveled the unpaved country roads by wagon drawn by his horse, Lou, peddling goods like cloth, shoes and underwear.” In 1927, he started The Service Store in Fountain Inn, South Carolina. In his own words, he “cooked on a 67-cent hot plate and slept on a $1.50 army cot in the back of the store for two years.” In 1930, he married Ida Belle Andronosky (1909-1985). Five years later, the Druckers moved to Denmark, South Carolina, where he established a larger retail store, Morris Drucker’s Dry Goods. Drucker retired in 1967.1