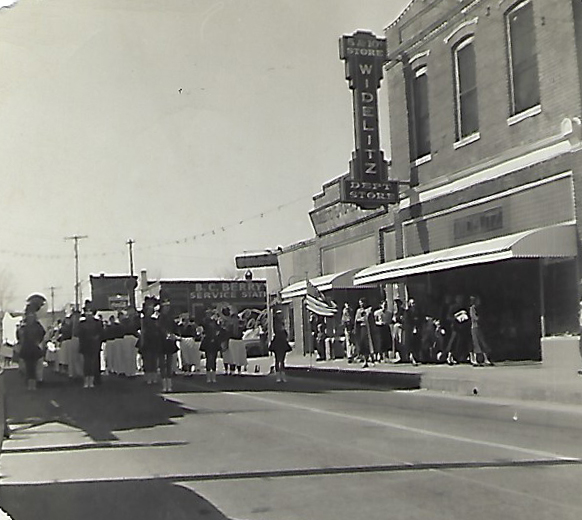 My parents opened the best and the largest dry goods store in the city of Harleyville, South Carolina (and the only store). As I grew older and wanted a larger variety of entertainment and activities, luckily, my parents moved to a county seat; namely the metropolis of St. George. I spent many, many, many, many years in the St. George Schools giving our excellent teachers some of their biggest challenges.  –Sidney Louis Widelitz

The family moved to St. George by 1921, where Daniel opened D. Widelitz, a dry goods store that was initially known as Widelitz Five-and-Dime. Daniel and Sarah had a third son, Haskell (1924-2003) in 1924. The following year, they opened Widelitz Department Store, which sold men’s, women’s, and children’s apparel, in the adjacent storefront. By 1930, both Sarah and Murray were clerking in the store. After Daniel’s death in 1938, his wife and children assumed operation of both stores, with Sarah listed as the proprietor in 1940. Sidney Louis Widelitz, then in charge of the Five-and-Dime, married Fannie Mark (1916-1975) on September 3, 1939 in Williamston, South Carolina. Fannie Mark was born to Louis (1881-1962) and Getta Mark (1881-1948) in Greenwood County, South Carolina. A shoemaker by trade, Louis Mark was the proprietor of Greenwood Shoe Hospital in the 1910s and later opened a department store in Ware Shoals. Fannie worked at her parents’ department store as a teenager and helped the family avert bankruptcy during the Great Depression. After her marriage, Fannie managed the ladies’ department at Widelitz Department Store, while her brother-in-law, Murray D., managed the men’s department. The family also operated the Hotel Palms and the local bowling alley. After Murray D. Widelitz was gravely injured in a car wreck in 1956 (he remained hospitalized until his death five years later), Fannie Mark and Sidney Louis Widelitz managed the department store. Fannie also served as the director of the Farmers and Merchants Bank. Sidney and Fannie’s only child, Sara Pearl Widelitz, began working at the store at the age of seven. Although she was the only Jewish child growing up in St. George, her mother’s siblings and children often visited to buy clothing at the store. Her cousin, Mark Pinosky, remembers meals at the Widelitz family home including sweet tea, fried chicken, and half-moon potatoes. Widelitz Department Store closed in 1975.