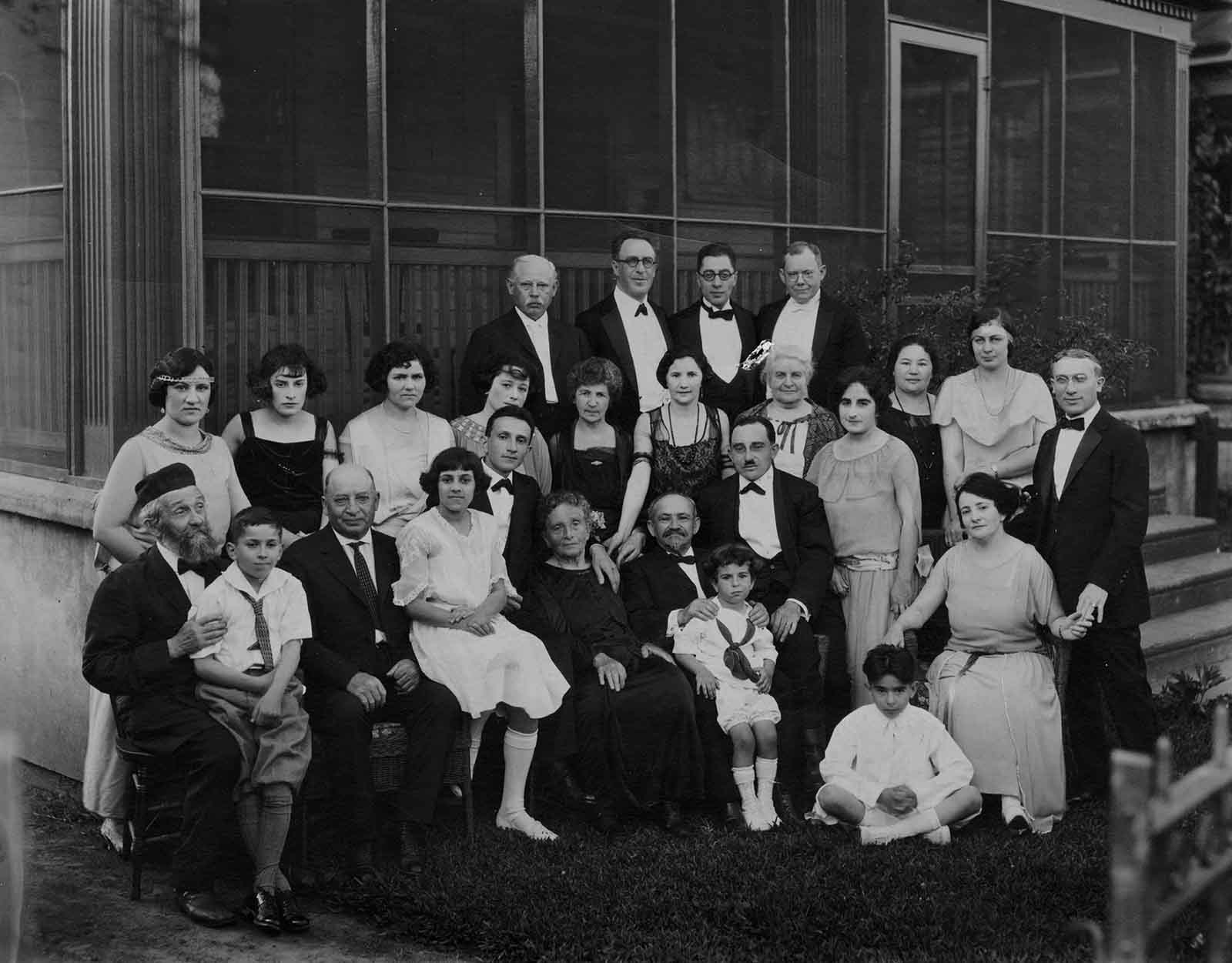 When I tell the story of my family I sometimes exclaim, “I am lucky that my great-grandfather could not make a living in Poland.”

My paternal great-grandfather, Alexander Banov (originally Banovitch, Bonovicz, or Bonowitz) was born in 1853 in Kopcheve (in Yiddish; Kopciowo in Polish), a village in Suwalki Gubernia, which was a portion of Poland then under the Russian Empire; it is now Kapciamiestis, Lithuania. At the time Kopcheve had 800 to 900 people, of whom half were Jews. Alexander’s father, Moshe Banovitch, was a letter carrier and, with his wife Rachel Leah, had five children; Alexander was their second son.

In 1876, Alexander (whose nickname was “Sender”) married Szejna (aka Sheyna and Senie) Danilowicz; she renamed herself Sonia in the United States. They had five children: Rebecca (aka Becky), Rachel (aka Raye), Cassell, David, and Leizer (renamed Leon in the U.S.). At some point they moved to Nemnovo, a town on the Neman River, which is now in Belarus. They were the only Jewish family there.

Life in Nemnovo was challenging. As explained by his son David Banov in an oral history, there were no streets in the town. The weather in the winter was severely cold. The family lived in an old log cabin with three rooms and a hard clay floor. The main room had a tall bricked-in oven for heating and baking bread. Alexander was at various times a peddler, selling goods door to door, a worker in a brick kiln, and maybe a shoemaker.

When he was off peddling, Alexander would sometimes leave his wife and children with his father in Kopcheve, which was about 12 miles away. Sonia and the children stayed in one room. Moshe’s father-in-law, Moshe Rutenberg, had given the land for the village synagogue in Kopcheve. The synagogue had two stories. It also served as a school (cheder) for Jewish children, including Cassell and David. In 1893 or 1894, the czar issued an ukase (edict) that everyone must learn to speak, read, and write Russian. Therefore, twice a week, the students went to the Russian school for two hours. The Cossacks would often come swooping down on horseback; when that happened, Sonia made the children come into the house until the Cossacks left.

Since Alexander did not make enough money to meet the needs of his family, he decided to leave Nemnovo and come to America. He immigrated to the United States in 1889. In time, he sent for Rebecca and then Cassell. Meanwhile, Alexander had established a business in Red Top, an unincorporated rural community south of Charleston along the Savannah Highway (U.S. Highway 17). (Spoiler alert: Red Top will appear again later in this story!) This was the start of a checkered career in South Carolina.

In July 1895, Sonia, Raye, David, and Leon (my grandfather, then seven years old) departed from Russian Poland. The only things they took on the trip were clothing for the four of them, linens, and certain holy things such as a Torah, together with a Megillah that belonged to Moshe until he died. In August, they arrived in New York and then took another ship to Charleston, where they were met at the wharf by Becky (then about 18 years old) and a few of her friends. Alexander did not meet them there. He was still at his store in Red Top.

Alexander was not the only member of his family to come to Charleston. An older brother, Israel Leib Bonowitz (1844–1925)—renamed Banov in this country—arrived in Charleston in 1903 and became a storekeeper. Four nephews also came to Charleston: Isaac Wolf (or Wolfe) Banov (1862–1924); Samuel Leizer Banov (1869–1933); Hyman Simon Banov (1876–1960), who went by Simon; and Charles (aka Clarence) Banov (1880–1957). A niece, Lena Reah Banov, married Marcus Barshay and lived in Summerville. It is important to recognize that Wolf Banov was the first member of the Banov mishpocha to settle in Charleston. He emigrated in 1883 and, with Joseph Volaski, established a very fine men’s clothing store, Banov & Volaski, initially at 383–385 King Street, on the northwest corner of King and Calhoun, where the Francis Marion Hotel has stood for many decades.

Shortly after Sonia arrived in Charleston with the rest of the family, Alexander formed a partnership with his nephew Simon and they opened a store in Georgetown, South Carolina, on the waterfront. Alexander then closed his Red Top store, disposing of as much of his merchandise as possible and transferring the rest of his stock to the Georgetown store. In Georgetown they had a two-story house on the waterfront with a very large yard and a banana tree in the backyard. They also had a horse named Charlie. The house had electric lights and a toilet inside the house. The house needed painting. However, compared with their life in Europe, Uncle Dave said, this was almost luxury! For cooking, they probably used wood. David recalled fishing for catfish “from the toilet holes over the water.”

Business at Alexander and Simon’s store was very poor, and they were forced to close. Alexander “lost everything,” according to his son David. He had to sell the horse and wagon, and he paid off as much on the merchandise (bought on credit) as he could. They decided to move back to Charleston. Simon went back into business with his brothers Sam and Charles Banov in Charleston, and Alexander began a small clothing store on King Street, opposite Columbus Street. The 1898 Charleston city directory lists him as residing at 3 Warren Street with his wife and Cassell.

Early in the 20th century, Alexander started a new store in Red Top, selling dry goods. It was patronized mainly by poor residents of that community, mostly African Americans. The 1901 Charleston city directory characterized him as a “country merchant,” and the 1906 directory stated that his address was 377 King Street. In 1908, “Alex Banov” was again designated a “country merchant.” (Newspaper stories sometimes referred to him as “Alex” as well.) He would operate his store during the week, travel to Charleston on Friday for Shabbat, and return on Sunday. He was a lifelong member of the Brith Sholom Congregation, a member of Dan Lodge No. 593, and a registered Democrat. While Alexander was in Red Top, his wife, Sonia, remained in Charleston, staying with their son Dr. Leon Banov at his house on Mill Street. My father, Dr. Leon Banov, Jr., described Sonia as a “simple person,” who did not adjust well to the New World and did not speak English well.

When son David Banov finished elementary school, Alexander could not afford to send him to high school, so David began helping in the store in Red Top. The business occupied the same two-story wooden building that Alexander had vacated two years earlier. David would go there on Fridays so he could help on Saturdays, Sundays, and Mondays, the days when they saw the most business. According to David, “The rest of the week things were dull.” (David eventually owned a sporting goods store in Wheeling, West Virginia.)

In his oral history for the Jewish Heritage Collection at the College of Charleston (June 2, 2000), Dr. Leon Banov, Jr., (my father) talked about Alexander’s store in Red Top:

My grandfather would come out [to] the store, go over there by train to Johns Island, and then have a horse and buggy take him about two miles to the place there. I remember spending a few weekends over there. The area was very primitive, had kerosene lamps, and he stayed in the upper portion, overhead.

[T]here were only two stores [in Red Top]: my grandfather’s—he was called Uncle Alex—and the store next door was run by a fellow who, I remember, chewed tobacco and he made a living there, too. It wasn’t much of a living, but it was a living.

[The customers] were black folks there who couldn’t go to town or didn’t go to town, and it was not a brisk business that you’d see in one day, the general dry goods store there.

In August 1908, Alexander bought an acre lot on Bee’s Ferry Road for $275, perhaps with plans to open another country store. On December 27, 1909, a fire in Red Top burned down Alexander’s store, along with two other stores. The Charleston Evening Post described Red Top as “a collection of stores and a few houses. Most of the merchants live in the second story of their buildings. . . . The village of Red Top is without a fire engine, and the best that could be done was to organize a bucket brigade.” Alexander was the only merchant who carried any insurance, and his property was only partly covered.

Sonia died in Charleston on June 8, 1926. In December 1929, a second fire destroyed Alexander’s Red Top store and one other business. He died on September 22, 1934, and was buried with Sonia in the Brith Sholom Magnolia Cemetery. Alexander lived long enough to see all their children marry, to know their grandchildren, and to take pride in the fact that their son Leon was appointed director of the Charleston City Health Department and later director of the combined city-county Health Department. When Alexander died the newspaper stated that he had operated a store in Red Top for 45 years before his retirement. Not wealthy, he left a simple one-page will.