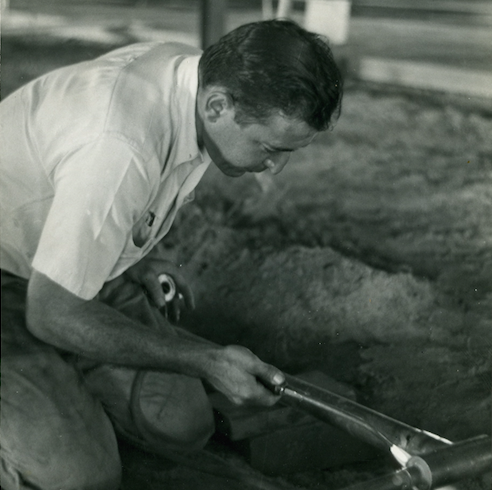 My father, Moses Collis, was born in Charleston, SC, on October 24, 1918 to Meyer and Lena Shiavitz Collis. Weighing in at 13 pounds, he always said he was the largest baby born in Charleston County in 1918. My dad also claimed his mother walked from her home at 165 King Street to the hospital on Queen Street to deliver him. The physical strength my grandmother displayed during labor carried over to her youngest surviving child, Mosie

As a child, Mosie attended Crafts School. When he was 11 years old, the Great Depression began. My dad—who already had a paper route for The News and Courier— began working for Mr. W. K. Prause as a plumber’s helper. (Mr. Prause’s shop was on lower King Street next door to the library across from the Collis’ bakery.) The job, digging ditches, was hard and dirty work. Mosie stuck with the job and, after each payday, gave his mother his hard earned money. My grandmother, upset at seeing her young son’s calloused hands, was grateful for the extra money he earned for the family. Mosie attended and graduated from the High School of Charleston. During this time, he continued to work for Mr. Prause and at age 16 became the youngest licensed journeyman plumber in the state.

The High School of Charleston’s motto was “Enter to Learn. Leave to Serve.” Following graduation, my dad entered the US Navy. (His desire was to attend college and medical school, but this was not an option during the Depression.)  Shortly after his discharge, Pearl Harbor was bombed and back into the Navy he went. His plumbing skills came in handy, as he became a pipe fitter. In those days, the myriads of pipes on the ships were insulated with asbestos. This negatively impacted my father’s health in his later years.

Following the end of World War II, my father, who had achieved the rank of Chief Petty Officer, returned to Charleston with a few hundred dollars and a surplus Jeep. With financial backing from his oldest sister Sadie Collis Isquith and encouragement from his sister Becky Collis Schreiberg’s brother-in-law Morris Schreiberg, Mosie opened his plumbing and heating business in Kingstree, SC. (I’m assuming this was sometime in 1945 or 1946.) The small storefront was located on Mill Street next door to the fire station. Kingstree had no licensed plumber at the time and the business was successful. My aunt Becky helped out in the office and Daddy and a helper did all the outside work.The business grew and Mosie purchased 2 lots from one of the Schreiberg brothers and built an office with a showroom, warehouse, and fenced storage area at 303 West Academy Street. (Our family home was subsequently built on the lot at 305 West Academy Street.) During the years that followed, Mosie pursued additional training in air conditioning and refrigeration and became a licensed mechanical contractor. At this point, the business was renamed and incorporated and became Moses Collis Mechanical Contractors, Inc. The business remained at this address until it was closed in 1991.

With his outgoing personality and wonderful sense of humor, Daddy was successful. He was honest and hard working and a perfectionist. His customers respected him. In November 1957, he married my mother, Jennie Goldberg Collis. Momma was a wonderful bookkeeper and office manager and provided the financial acumen needed to run the business. Daddy continued to be the estimator and salesman as well as the expert resource for his crews. My father employed both white and African American employees. He paid them well and treated them equally and respectfully while holding them to high standards. He had wonderful, long term relationships with his plumbing and HVAC suppliers. I like to say that I was fed, clothed, and educated by Kohler and Carrier.

During the growth of the public school system in SC, my father installed the plumbing and heating in many schools built in the lower half of the state. His company also installed the work at many Hardee’s franchises and BiLo Supermarkets built in the 1970’s. He was a celebrated Carrier equipment dealer and he and my mother traveled the world on reward trips. It was not unusual for my father to spend the weekends estimating jobs. He would unfurl the blueprints on our dining room table and use a slide rule to measure for pipe, sheet metal, and other required supplies. He would dictate what was needed and I would keep a running tally. (My dad could also fabricate sheet metal ductwork and had the equipment to do so in his warehouse. He also welded beautifully.) We bonded over these weekend sessions and I gained the added skill of how to read blueprints. In 1972, his company was installing the HVAC and plumbing for the new building for the Exchange Bank of Kingstree. On May 12, 1972, Daddy suffered a fall descending a ladder from the roof of the building and sustained a compound fracture of his left ankle. This was a life-altering situation for his work and for our family.

During the subsequent years, many of Daddy’s crew left to pursue other opportunities. The economics of the region changed and small jobs and repair work became the norm. Following my mother’s unexpected death in September 1990, my father’s health failed and the business was closed in early 1991. The building was sold and housed many different businesses over the years. In 2018, the warehouse— the rear portion of the building— was demolished and the front was remodeled and became a Subway restaurant.Overall, I like to think that Moses Collis Mechanical Contractors, Inc. had a good run. Although he didn’t achieve his dream of becoming a doctor, Daddy positively impacted the health and well-being of many residents in the area by providing properly designed and installed residential and commercial plumbing and HVAC systems.