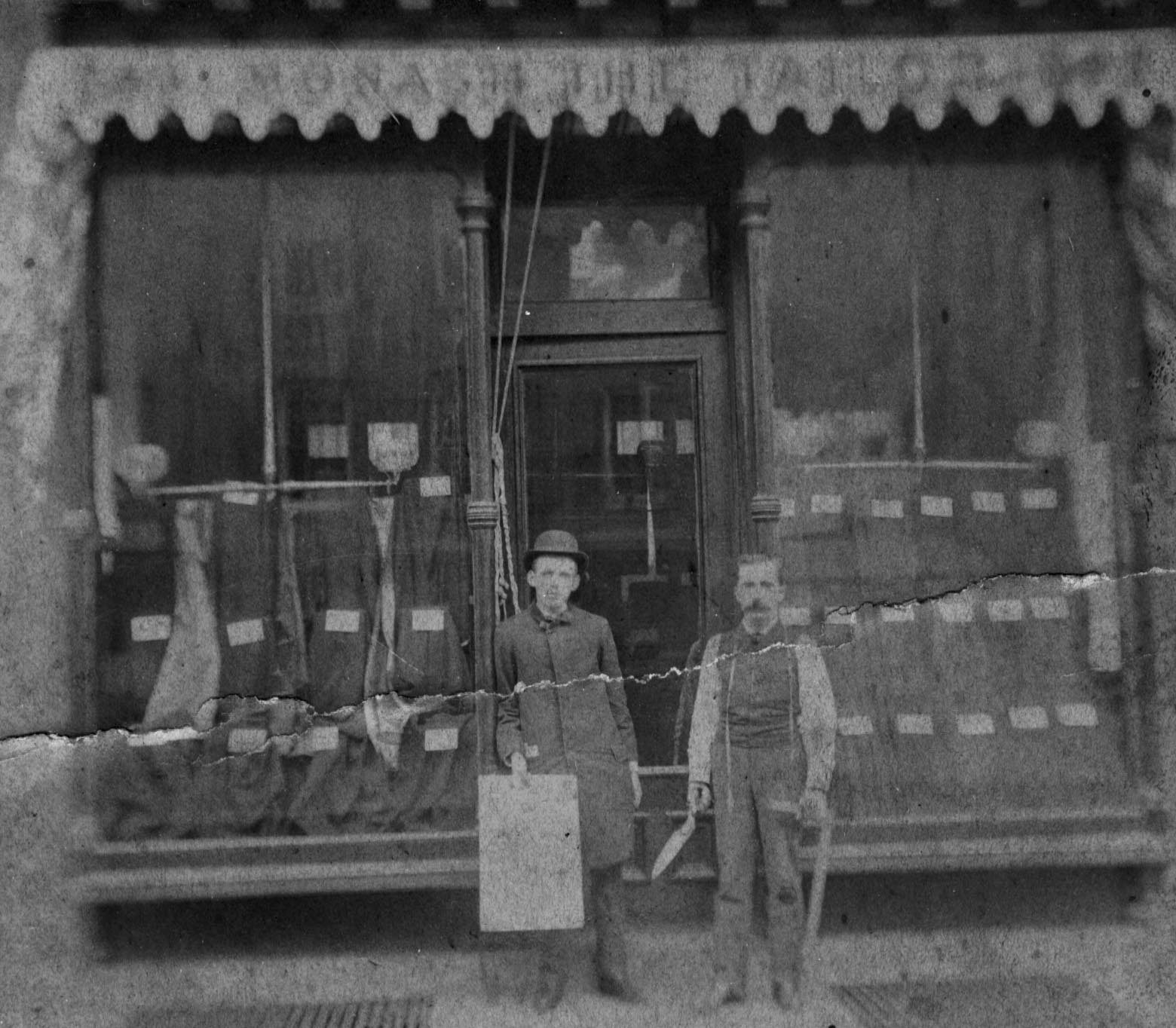 Above: Monash the Tailor

Isaac Morris Monash, a cousin of Sir John Monash, the legendary World War I general from Australia, was Charleston’s first pawn broker, and he was one of my great-grandfathers.

His family, named Monasch when he was born, came from Kurnick and Krotoschin, towns in Posen Province, Prussia, near Breslau (today, Wroclaw, Poland). The Monash family was influential in creating modern Judaism. Baer-Lobel Monasch, a first cousin, was a publisher of Jewish liturgical books, a rare edition of the Jerusalem Talmud, and writings of the Haskalah movement; his daughter Marie was married to Heinrich Graetz, the first great modern Jewish historian; and his grandson, Sir John Monash, was considered one of the most innovative Allied generals in the Great War (World War I) and in developing the modern nation of Australia.

My great-grandfather, who called himself Morris, I. Morris, and sometimes I. M., had his own notable career.

Born in Prussia in 1853, Morris immigrated to New York City in 1862, when he was only nine. At age 18, Morris was a salesman living in Brooklyn, and throughout the 1870s he worked in clothing stores.

In 1879, he went west to seek his fortune and ended up in Leadville, Colorado, where considerable silver had been discovered in the nearby mountains. (In 1881, Morris bought a 13/48th interest in the Minnie Mine lode on Sheep Mountain. I have the deed, but no information about what happened to the mine.)

The year he arrived in Leadville, Morris advertised a new clothing store, Monash & Co., in the local newspaper, promising “the largest stock of clothing ever brought into the Rocky Mountain Country,” according to a biography written by Trevor Mark for the Temple Israel Foundation in Leadville. Morris’s clothing emporium apparently never came to fruition, and instead he worked as a clerk for two other Jewish clothiers at a store called The Palace of Fashion. He received some notoriety in Leadville by taking the initiative to investigate a fire at that store, which occurred in May 1882. During the winter, Mr. Mark wrote, “Isaac went ‘undercover’ at the Central Fire Station after he applied to be a firefighter and ingratiated himself into the company.” During a “carousal” with some firefighters, Morris learned who really had set the fire—three firefighters! His discovery resulted in a critical affidavit that was produced in March 1883 during the arson trial of three men, including two other Jewish merchants and a third man. Morris’s investigation contributed to the acquittal of these three men. Following the inquiry, the firemen at the Central Fire Station told the Leadville Daily Herald that “under no circumstances would [Mr. Monash] be a genial companion, even in a carousal….”

In January 1892, now calling himself I. Morris Monash, he opened the Charleston Pawn Office at 131 Market Street, the first pawn shop in the city. (Later, in about 1905, another relative of mine, Samuel Banov, opened Uncle Sam’s pawn shop.)* Morris’s first newspaper ad ran on January 28, 1892. The next day Charleston’s News and Courier reported:

Until recently there has never been a licensed pawn broker in Charleston. The business has, however, been done in an underhanded way. ‘Uncle Morris’ is the name on the sign of the new establishment in Market street, but upon investigation it is ascertained that the place is conducted by Mr. I. Morris Monash, in behalf of a stock company which operates offices in Savannah, Augusta and other Southern cities.

Mr. Monash, to all appearances, conducts his business perfectly legitimately.

The shop will be of considerable service to the detectives in ferreting out robberies, it is thought. Mr. Monash has a list of all stolen property, so that he might know how to act. He proposed making a side entrance to the building, although his transactions are now all confidential.

In the beginning, Morris ran ads in the Charleston newspapers virtually daily. He called himself “Uncle Morris.” His sales pitch: “Never Be Broke.” In 1896 and 1899, when he had competition, he advertised as “Uncle Morris, the Old Reliable Pawn Broker.”

Morris encountered a few problems with guns in his pawn shop. In April 1892, he was arrested for selling a pistol. He had a license to run his pawn shop, but not a license to sell firearms, in accordance with a new ordinance. In court his lawyer argued that Morris did not own the pistol; he was just “the forecloser of a mortgage when he disposed of a pistol that was unredeemed.” Available records do not indicate how the court regarded that rather novel argument, but a later news story indicated that he was permitted to sell firearms.

On December 14, 1894, another gun in Morris’s store led to a bad experience. A patron of the pawn shop was looking at pistols. The News and Courier described what happened next: “Several pistols were put before him, and as he was looking at and comparing them he picked up a large one, his finger coming into contact with the trigger. As usual with unloaded pistols, it went off, and the bullet struck Uncle Morris in the wrist and went through it, causing a painful wound.” The story continued, “Uncle Morris, although following a business the conductors of which are usually not generally beloved, is known as a ‘square’ man, and is very popular among a host of friends and customers, who hope that he will be all right again in a day or two.”

A third gun incident occurred in 1908, when a man named Henry Chisolm shot I. M. Monash. No details are available now, except that a jury found Chisolm not guilty by reason of insanity.

In 1905, Rabbi Barnett Elzas listed Morris as a leading merchant in The Jews of South Carolina: From the Earliest Times to the Present Day. In 1912, Morris began building a three-story brick building at 131–133 Market Street. However, by 1913, he must have left the pawn business, for he was then listed as a jeweler at 209 King Street, and the 1913 city directory stated that buildings at 131–133 Market Street were in the course of construction. Over the years he engaged in many real estate transactions in Charleston, including selling a number of lots on Romney Street.

Morris must have had a turn of fortune by 1916 or 1917 and perhaps was unable to pay his contractors. About this time a mechanic’s lien in the amount of $10,616.75 was placed on his property, and, in 1917, the Court of Common Pleas issued a decree to sell Morris’s properties at 131 and 133 Market Street, with the fixtures on them. By September 1917, Morris had vacated the Monash Building on Market Street, and it was used as a barracks for soldiers during the Great War.

Meanwhile, in 1914, Morris moved with Annie and their children—Isidor, Minnie, and Herbert—from 52 Legare Street to 6 Mill Street. They were members of Kahal Kadosh Beth Elohim. In time son Isidor (1887–1923) became a prominent lawyer on Broad Street and married Rachel (Ray) Bluestein of Charleston (1890–1954). Herbert (1891–1939), who never married, became a pharmacist. Minnie married my grandfather, Dr. Leon Banov, in 1912, when he was a pharmacist and before he became a doctor.

Morris died on September 17, 1918, following a long illness. The News and Courier, in reporting his death, noted:

Mr. Monash was a cousin of the major general of that surname commanding a division of colonial soldiers from Australia and New Zealand, now fighting under the British flag in France. For years he was well known in his business, which was conducted on Market street. While in the pawn broking business, his trade name, ‘Uncle Morris,’ was well known in the community.

He was buried in KKBE’s Huguenin Avenue cemetery. The News and Courier described his funeral as follows:

The ceremonies at the home and at the grave were attended by that quality of extreme and pure simplicity which characterized Mr. Monash’s manner of life. At his request there was a total absence of music, flowers and other ornate features which are usually given prominence on such occasions.

My uncle Morton, who was born the next year, was likely named for him.

In 1943, the building at 131–133 Market Street, known as the “Monash Building,” was destroyed in a fire. Thus, decades after Morris closed his pawn shop, Charleston still recognized the building as one he built.

Hyman Fechter and Joseph Hepler advertised the New Uptown Pawn Office at 554 King Street in the Charleston Evening Post, May 9, 1899. Uncle Dave, pawn broker, 130 Market Street, advertised in the June 9, 1899, issue. Operated by I. D. Rubin, Uncle Dave’s was across the street from Uncle Morris’s shop.