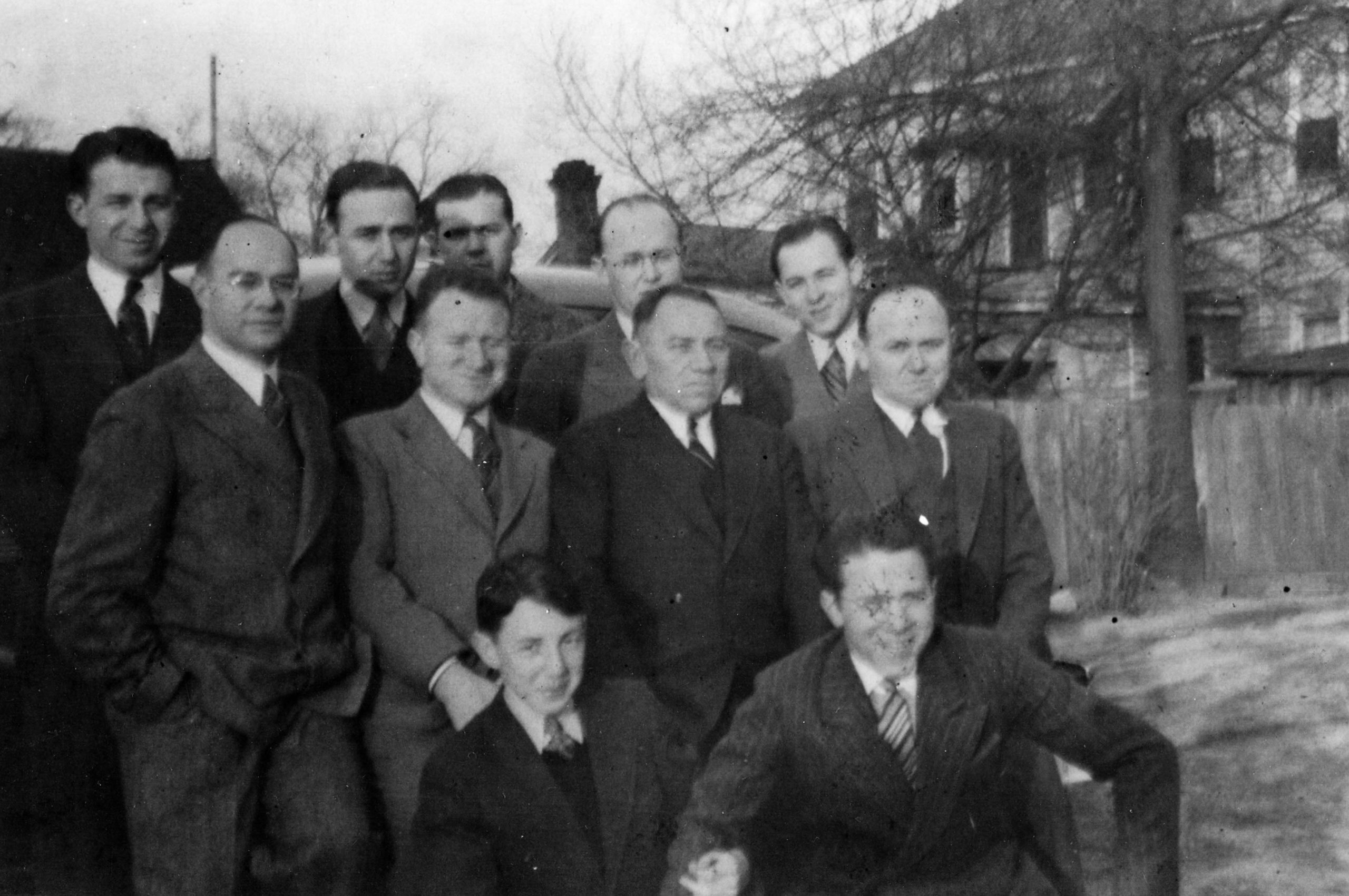 Many business careers are stories of father-son relationships with the father originating the business and the sons carrying the torch after the father’s death. This is the history of the Brody Brothers Dry Goods Company, founded in 1917 by my grandfather Hyman Joseph Brody (1876–1946) as a simple shoe store in Sumter, South Carolina. Hyman and his brothers and sisters, children of Mordechai Schuster and Ruth Palevitz Schuster, settled in New York briefly after emigrating from Russia, but within a few years Hyman moved to the South on advice from friends.

Hyman Joseph Brody (née Schuster; family lore has it that “Brody” was on a sign at the New York docks and was adopted because it was easier to pronounce than Schuster), a native of Kletzk, Russia, immigrated to the United States in 1906. His wife, Bessie Lampert Krashnishelsky Brody (1882–1967), immigrated in 1913 with their children Sam, Raymond, William, Leo, Abram, and Jake. After Hyman and Bessie reunited, they moved to Anderson, South Carolina. Over time, the family grew, adding four boys—Reuben, Julius Samuel (“Sammy”), Morris, and Alex—and one girl, Ruth.

Hyman set up shop as a cobbler and shoemaker when the Brodys arrived in Anderson in 1913. Five years later they moved to the Midlands town of Sumter, South Carolina, and settled in what the family called the “Big House” at 10 South Washington Street. The Brody home was walking distance from Liberty Street, where Hyman established a shoe store, and near Temple Sinai, which had been built in 1913—the congregation’s second sanctuary, still standing today.

Convinced that Sumter was destined to grow and that its future was bright, Hyman did his utmost to expand the business. The shoe store became Brody’s Department Store, located at 8 West Liberty Street; in 1929, its floor space was tripled to include 10 and 12 West Liberty Street. All the Brody brothers worked in the store and contributed to its success. The two oldest siblings, Sam (1901– 1986) and Raymond (1902–1992), helped their father and stayed in retailing for their lifetimes. With financial support from his brothers, William (1904–1974) moved to Philadelphia and became a physician. Throughout his life, he remained in close touch with the family, providing medical advice when needed. In 1928, Leo (1906–2003) moved to Kinston, North Carolina, and established a second Brody’s Department Store. The Kinston store collaborated with the Sumter store in buying, selling, and public relations as the Brody brothers built their enterprises.

The original Brody’s was so successful that, in 1934, the brothers opened a higher-end store at 37–39 North Main Street called The Capitol Department Store. Three years later The Capitol moved to a more central location at 12 South Main Street. Remodeling to keep abreast of the times, the Brodys expanded the store into two adjoining properties. They also joined Independent Retail Buying Syndicate, enabling them to offer, at affordable prices, nationally known brands usually sold at much larger department stores. The Capitol became known as the largest Jewish-operated dry goods store in South Carolina at the time.

In 1938, Hyman Brody retired from the business because of his and his wife’s poor health. The same year, the Sumter business was reorganized and incorporated as Brody Brothers Dry Goods Company, with Leo, Abram, Jake, and Reuben as officers. Brody policy, according to the “Employee Handbook of the Capitol Dept. Store,” was to “sell merchandise as reasonably as possible,” “to give honest value,” and “to satisfy its customers.” The rapid expansion and phenomenal growth of the company proved the soundness of this policy.

Also in 1938, Brody’s, Inc., opened its doors in Greenville, North Carolina, about 30 miles northeast of Kinston. Leo got the store up and running and, at age 21, Ruth took over until Morris (1918–2011) returned from World War II. His son Hyman (“HJ”) worked with him in the late 1970s, after his graduation from the University of Pennsylvania.

Julius Samuel (Sammy) (1916–1994) joined Leo in Kinston after serving in the world war. Sammy was not cut out for retailing but became very successful in radio/TV and the soft drink industry; his philanthropy is recognized to this day. Leo, Sammy, and Morris were instrumental in establishing the medical school at East Carolina University in Greenville, renamed the Brody School of Medicine in their honor.

Abram (1909–1983), my father, married Sara Pearlstine from Olar, South Carolina, in 1946, shortly after the death of his father, and he settled down to manage the shoe and men’s departments of The Capitol in Sumter. Of the other Brody brothers in the retail business, Reuben (1914–1964) managed the women’s department, Jake (1911–1999) handled physical renovations, maintenance, and housewares, and Leo managed the Kinston store, which carried similar merchandise as The Capitol.

An outstanding attribute of the company was good employee relations and good working conditions managed by local owners. Indeed, the tradition continued after World War II when the youngest brother, Alex (1922–1997), having returned from the war and attended college, became the manager of the original Brody’s on Liberty Street in Sumter. He devoted his life to Sumter retailing, and the Alex Brody Pavilion on Main Street was erected in his name.

Ruth Brody Greenberg (1920–2012), the only daughter of Hyman and Bessie Brody, married Dr. Stephen A. Greenberg and moved to Florence, South Carolina, 40 miles from Sumter. department store in Greenville while her brothers served in the military. When she wasn’t tending to her two sons, Philip and Stuart— both physicians who have been active in and served as board members of JHSSC—she was a stalwart for her brothers.

The Brodys raised their families and contributed materially to the growing Jewish community of Sumter by constructing a religious school adjacent to Temple Sinai, dedicated in 1956 as the Hyman Brody Educational Building.

The Brody Brothers Dry Goods Company of Sumter was the pivotal point from which the North Carolina Brody brothers catapulted. As long as retailing was in operation, the Brody brothers and cousins worked together for mutual continuity and excellence to serve the public good of the Carolinas. Thanks to the children of the Brody brothers, that legacy continues today with the Alex Brody Pavilion in Sumter, contributions to Sumter’s Temple Sinai Jewish History Center, the Ethel Brody Scholarship at the University of South Carolina in Columbia, the aforementioned Brody School of Medicine at East Carolina University in Greenville, the Brody Brothers Auditorium at Kinston High School, and at Duke University in Durham: the Brody Scholarships, the Brody Theater, the Café at the Nasher Art Museum, and the Charlotte Brody Discovery Garden.

After Reuben’s untimely death in 1963, the Brody family sold The Capitol Department Store to Alden’s of Chicago. Reuben’s son David, born and raised in Sumter, joined the North Carolina retailing operation after graduating from the University of Pennsylvania.

Abram continued to operate a shoe department within the newly owned Capitol. When The Capitol relocated to Jessamine Mall in 1980, the shoe department remained and became Abram Brody’s Shoes at 16 South Main Street. In 1983, on Abram’s death, the old Capitol store was renovated, and the shoe store became part of the new Brody’s On Main Department Store, managed by Alex and his son Mark. The store carried a higher priced line of women’s wear than the Brody’s Department store. Brodys on Main closed after Mark departed Sumter about 1988. Abram Brody Shoes remained for another ten years—still owned by the Brodys—and was sold around 1999, ending the reign of the Brody retail giants of Sumter.

In a 1959 essay written by my parents, Sara and Abram Brody, in honor of the 25th anniversary of The Capitol Department Store, they remarked that the growth of the Brody business “gives inspiration to individual ownership in today’s great economic structure of chain stores and large combines.” K-Mart, the first chain to come to Sumter, opened in the early ’60s, signaling the decline of locally operated stores. It’s interesting that K-Mart—owned by Sears, which is also liquidating—is set to close in March 2019. After 50 years of rise and decline, the chain store is now eclipsed by Amazon and the internet.