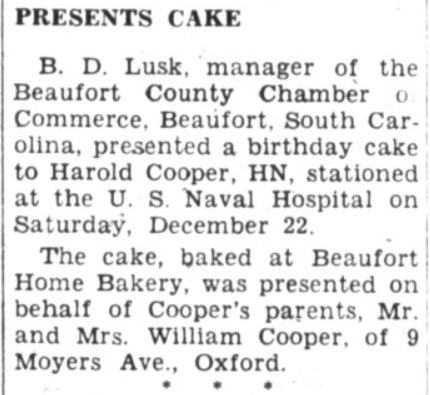 Born in Latvia in 1889, Leopold Schoenberg (1889-1966) immigrated to the United States in 1911. After he arrived in the United States, Schoenberg settled in Beaufort with his wife, Gertrude Ruth Goldberg (1896-1952), and worked as a salesman at a junk shop. Prior to 1930, Schoenberg opened his own business, the Beaufort Home Bakery, on Prince Street. Schoenberg’s son, Melvin Schoenberg (1924-2019), worked as a cake decorator at the bakery, before he moved to Atlanta, Georgia to attend Emory University.

Above: Reprinted from Oxford Leader, January 9, 1957 Reprinted from The Leatherneck, Volume 15, June 1932