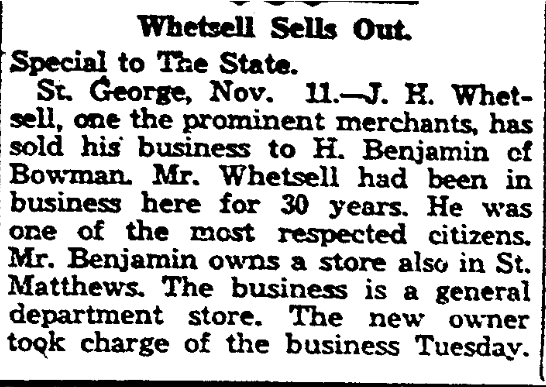 Herman Benjamin (1900-1983) was born in Baltimore, Maryland to Nathan (born 1870) and Fannie Benjamin. In 1896, before Herman’s birth, his parents and older siblings immigrated from Germany by way of Sussex, England. The family lived in the Chesapeake area for nearly 20 years. By 1920 Herman Benjamin had moved to Elloree, South Carolina. By 1923, Benjamin had moved 19 miles southwest to Bowman and by the mid-1920s, he had established a clothing and shoes store in Bowman which eventually became Benjamin’s Department Store. Over the next 45 years, Benjamin’s expanded to several towns between the Midlands and the Lowcountry. In 1929 he bought J.H. Whetsell’s store in St. George, which he converted to a Benjamin’s Department Store. Benjamin’s Department Stores closed in the 1970s after Irving Benjamin (1922-1998), his son, retired.

Above: Newspaper announcement for Benjamin purchasing Whetsell’s store in St. George. Reprinted from the State, November 12, 1929.