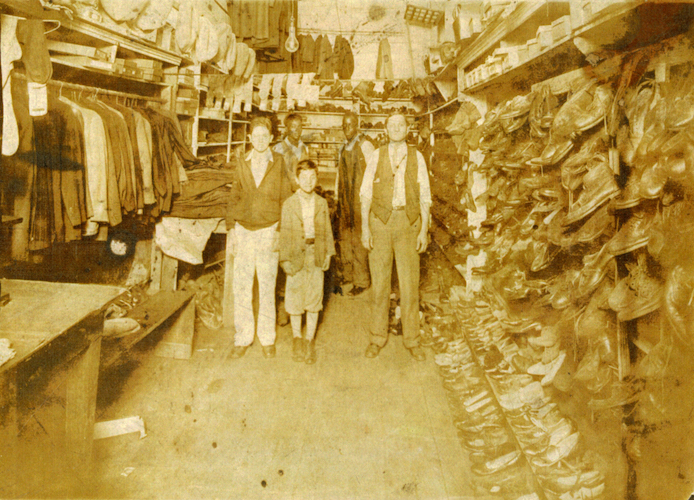 Abraham Berry (1883-1917), born in Vizna, Russia, immigrated to the United States in 1905. By 1909, he operated a clothing store at 1314 Assembly Street. The following year, Abraham relocated the business to 1312 Assembly Street, where it remained under his management until his death in 1917. His wife, Fannie Baker Berry (1886-1967), assumed management that year of the renamed Mrs. F. Berry, dry goods, and her father, Hyman Becker (later Baker) left Mount Pleasant to live with her. Fannie’s brother, Louis Baker (1882-1946), arrived in Columbia by 1919 and joined the business. Berry & Baker, which sold second-hand clothing and shoes, operated at the same address until 1922. Two other siblings, Frank and Jake Baker, also moved to Columbia in the 1920s—Baker’s Shoe Store, owned by Jake and Esther Kligerman Baker, would later operate two buildings in the north at 1320 Assembly Street.

Louis’s wife, Dora Grossman Baker (1893-1967), briefly managed the store in 1925, and Louis is not listed as an employee after 1922. The store, known once again by Fannie Berry’s name, closed in 1928. Louis founded Baker’s Repair Shop down the street that same year.