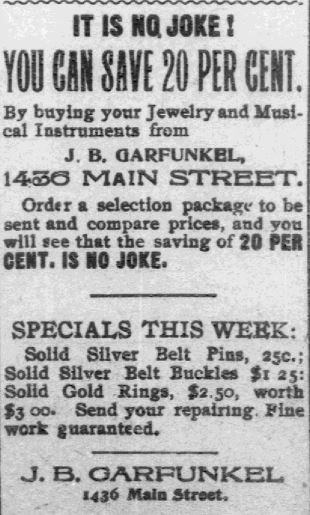 On October 2, 1892, South Carolina native Joseph Garfunkel (1871-1939) introduced himself to readers of local newspaper The State by “calling attention to his stock of gold watches for ladies,” which he proposed “for a short time to offer at very low figures.”1 In addition to watches and jewelry, Garfunkel sold musical instruments, glasses, and furs from his store at 1436 Main Street. Garfunkel operated his jewelry business until late 1895, when he went into the scrap metal, junk, and raw fur business. From his office at 1418 Main Street, Garfunkel purchased contracts to clean up structures that had been demolished or destroyed, the metal frames of which he would send to his scrap yard at 515 South Main Street. Garfunkel remained in Columbia through 1905. By the 1920s, he was living in Fort Meyers, Florida, where he served as president of the Fort Meyers Fur and Hide Company. During his time in Columbia, Garfunkel was associated with jewelers Barrett Visanska (1848-1932) and Sol Liebman (1871-1937).

Main Image: An advertisement for Garfunkel’s jewelry business. Reprinted from The State, August 13, 1895. Above Image: An advertisement for Garfunkel’s scrap metal, junk, and raw fur business. Reprinted from The State, January 31, 1896.