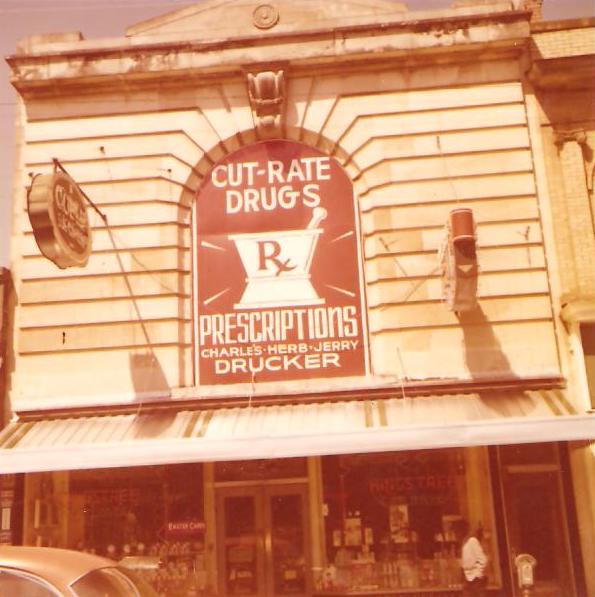 Charles “Charlie” Drucker (1902-1975) was born in Billina, Austria and immigrated to New York in 1913 with his large family. He married Polish immigrant Anna Levinson (1903-1965) in 1923 and together they had two children, Harold Herbert (1924-2002) and Jerome “Jerry” (1930-2005). The family moved to Kingstree about 1938 and opened Kingstree Cut Rate Drug Store. Charlie Drucker had been a soda jerk in a drugstore in New York, and he opened the pharmacy in hopes that his son, Herb, would become a pharmacist and take over the business.

Upon Herb Drucker’s return to South Carolina after World War II, he completed his degree at the University of South Carolina, married Jeanne Goldsmith (1928-2009), and returned to the family store, where he served as pharmacist and general manager. The store was renamed Drucker Drugs sometime in the 1960s. In 1972 Herb Drucker left to found The Pill Box, which gave Kingstree two pharmacies.

After Charlie Drucker’s death, his son, Jerry, ran Drucker Drugs. He subsequently passed management to his own son, Sam Drucker, who had served as practicing pharmacist since his uncle’s departure. Sam moved the store across the street, where it remains today, and opened a second Drucker Drugs in Hemingway. He became sole owner of Drucker Drugs upon Jerry Drucker’s death in 2005.