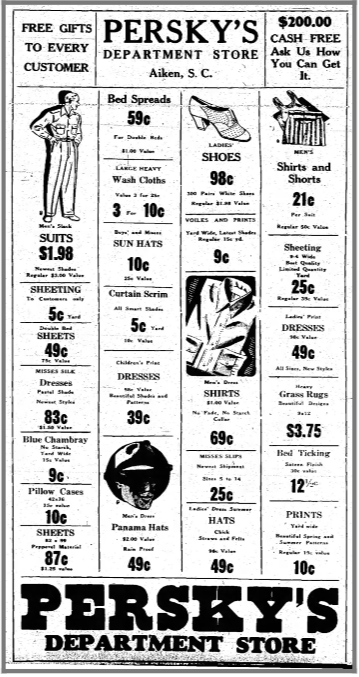 Nathan Persky (1888-1965) was born in Russian-controlled Poland to Mordecai Persky and Leah Dolgoff Persky (d.1939). As a youth, Nathan Persky attended one of the largest Jewish academies in Russia, studying diligently to understand his Jewish faith and heritage. After a fire burned his family’s store, Nathan Persky was left with no choice but to find a better life for his mother and himself in the United States. In 1909, Nathan immigrated to New York City. By the mid-1920s, Nathan Persky was living in Aiken. After marrying a local Jewish woman, Nathan and his wife, Esther Surasky Persky (1899-1985), moved to Savannah, Georgia where he worked as a grocery store clerk until around 1930 after which he and his family returned to Aiken. On November 30, 1932 Surasky & Perksky Department announced its grand opening in the Aiken Standard. By the 1940s, the store was doing business as Persky’s Department Store, though still with involvement from the Surasky family. In 1948, Esther’s brother Ralph (1910-1994) opened a furniture section in the department store. For the next decade and a half, Persky’s Department Store continued to sell a variety of goods, from foodstuffs to clothing to radios, at 848 Laurens Street (present-day 116 Laurens Street SW).

Advertisement for Persky’s Department Store, 1940. Reprinted from the Aiken Standard, May 1, 1940.