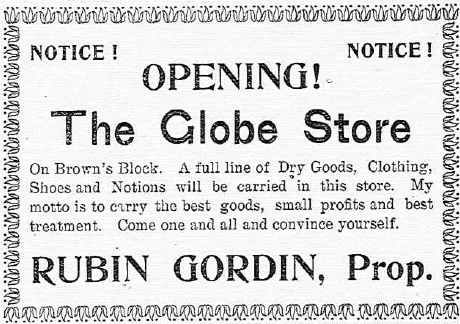 Reubin Gordin, who immigrated from Lomsk, Russia around 1905 with his brothers, Louis Gordin (1880-1962) and Morris Gordin (1885-1957), and opened Gordin Brothers in Orangeburg by 1907, subsequently opened the Globe Store in Manning in 1911. More commonly known as Reubin Gordin, the store sold dry goods, clothing, shoes, and notions. After Reubin Gordin was declared bankrupt in early 1912, the store’s contents were sold at auction in April for $850.