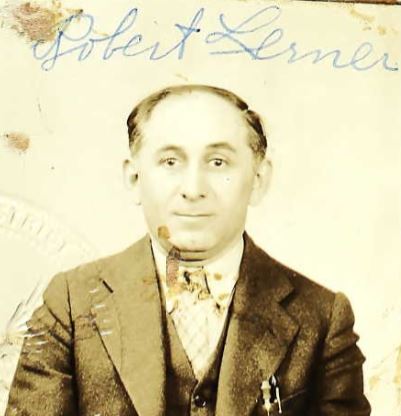 Robert (formerly Rachmiel) Lerner (1894-1969) was born in Miropol, Russia (present-day Myropil, Ukraine) in 1894. In 1901, his father, Max, immigrated to the United States. Three years later, in the fall of 1904, Robert and his mother, Becky Lerner, boarded the ship Oscar II in Copenhagen, Denmark. On November 16 of that year, they arrived in New York City. After the family reunited, they moved to Chelsea, Massachusetts, where Robert and his father worked as clothing merchants. In 1923, Robert married Sabina Adelsburg (1902-1958) (the sister of Jacob “Jack” Adelsburg (1895-1969) and Max Edelsburg (1906-1975) of Sumter, South Carolina), who immigrated to the United States from Warsaw, Poland in 1921. In 1923, Sabina gave birth to a son, Joshua (1924-1995), in New York. By 1930, the Lerner family was living in Union, South Carolina. There, Robert operated a retail dry goods store. By 1940, the family had moved again, this time to Hartsville, South Carolina. In Hartsville, Robert opened a retail ladies’ ready-to-wear clothing store that remained in operation through 1950. Sabina worked in the Hartsville store as a saleslady.