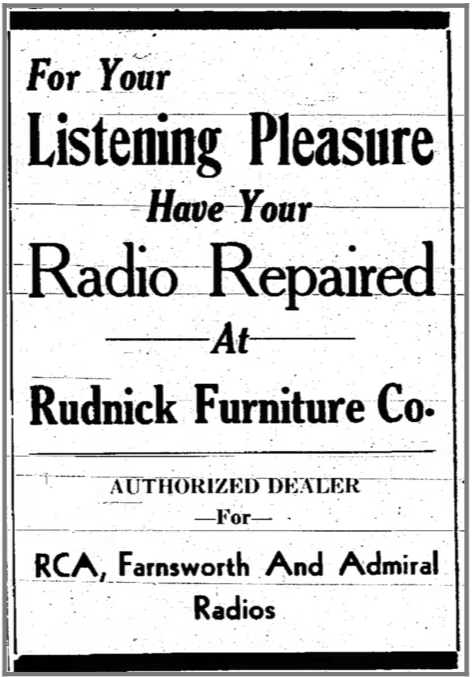 As an infant in 1890, Morris Rudnick (1889-1943) immigrated with his family from Tiekten, Russia to the United States. Between 1911 and 1928, Morris Rudnick sold dry goods in Aiken. On October 17, 1928, the Aiken Standard announced that Morris Rudnick “has decided to handle furniture, etc., hereafter.” Upon that notice, Rudnick began liquidating his non-furniture assets and established the Rudnick Furniture Company. Curiously, and perhaps because it was one of the newest and most popular technologies of the time, Rudnick continued to sell some wares that were not furniture pieces: radios. He also was an expert radio repair man, with many advertisements for his business focusing on his electronic hardware and his skills in working them. Although Morris Rudnick passed away in 1943, the business continued as a vital part of Aiken’s commercial district until 1965 when his son, Harold Rudnick (1925-1997), moved the store and renamed it the Rudnick Furniture Barn.