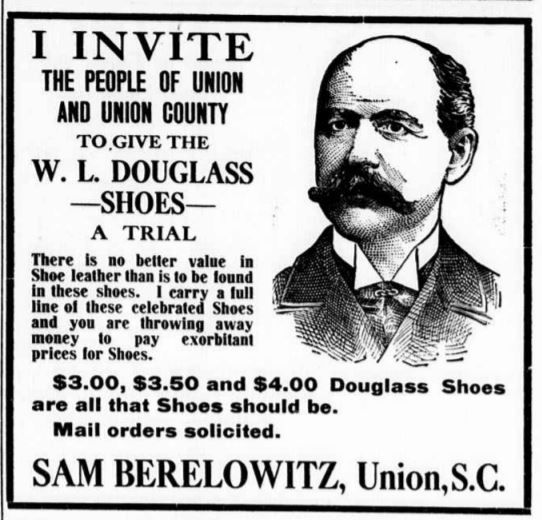 Sam Berelowitz (1880-1977) immigrated to the United States from Latvia around 1900. According to his obituary in the The Evening Sun (Baltimore, Maryland), he “moved to England and then Canada as a young man before settling in the United States, first in Union, S.C.”1 By 1907, Sam was living at 42 South Church Street in Union with his wife, Annie Berlin Berelowitz (1882-1959), and had opened a dry goods and shoe store under his name at 14 East Main Street. By 1921, Sam, Annie, and their four children had moved to 1725 North Smallwood Street in Baltimore, Maryland, presumably to be closer to Annie’s family. Annie immigrated to the United States from Russia with her parents, Joseph (1854-1932) and Hannah Berlin (1860-1915), and brothers in 1889. Her family settled in Baltimore, where Joseph worked as a dairy farmer. Although the year Annie moved to Union remains unclear, her relatives Hyman and Phillip Berlin moved from Baltimore to Union around the turn of the century.