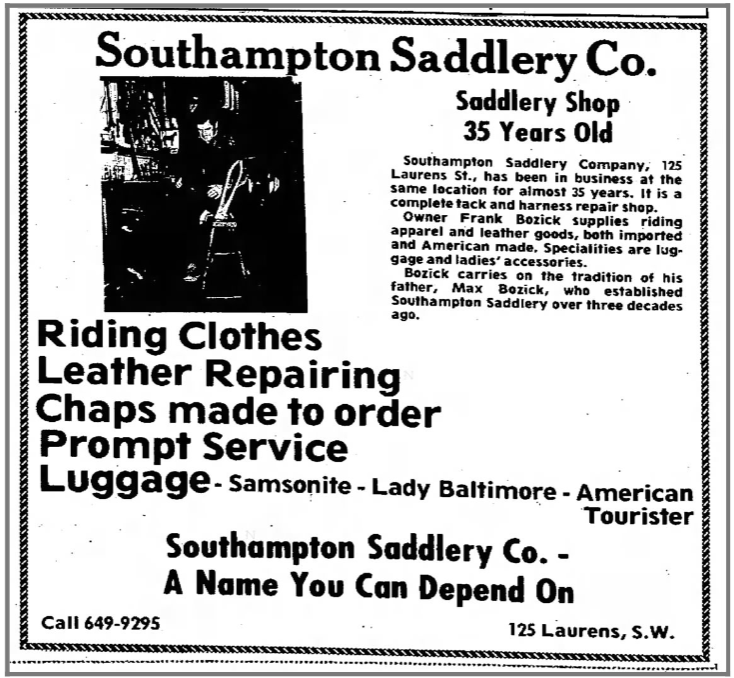 Max Bozick (1884-1955) and Annie Bozick (1889-1965) immigrated to the United States from Russian-occupied Poland in 1912 and 1920, respectively. When Annie Bozick came to America eight years after her husband, she arrived with their son, Frank Bozick (1915-1987). Max Bozick, working as a harness maker, settled his family in Southampton, Long Island, New York. By 1931 the family had moved to Aiken. The family would visit the New York area several times over the next few decades, with Frank Bozick registering there for the draft and marrying his wife, Rose Pialsky Bozick (1917-1996), in New York 1956. Being so tied to the Long Island area, their Aiken saddlery shop at present-day 105 Laurens Street SW was named Southampton Saddlery after their first American hometown. When Max Bozick passed away in 1955 operation of the business passed to Frank Bozick. Frank Bozick soon returned to Aiken with his wife and family and there continued his father’s business, moving the business in the 1970s to 125 Laurens Street SW. In 1982, Frank Bozick told the Aiken Standard that his family business was “the oldest store in Aiken.” When Frank Bozick passed away in 1987, his wife Rose Pialsky Bozick continued the saddlery store until 1991, culminating a local business legacy of 60 years.