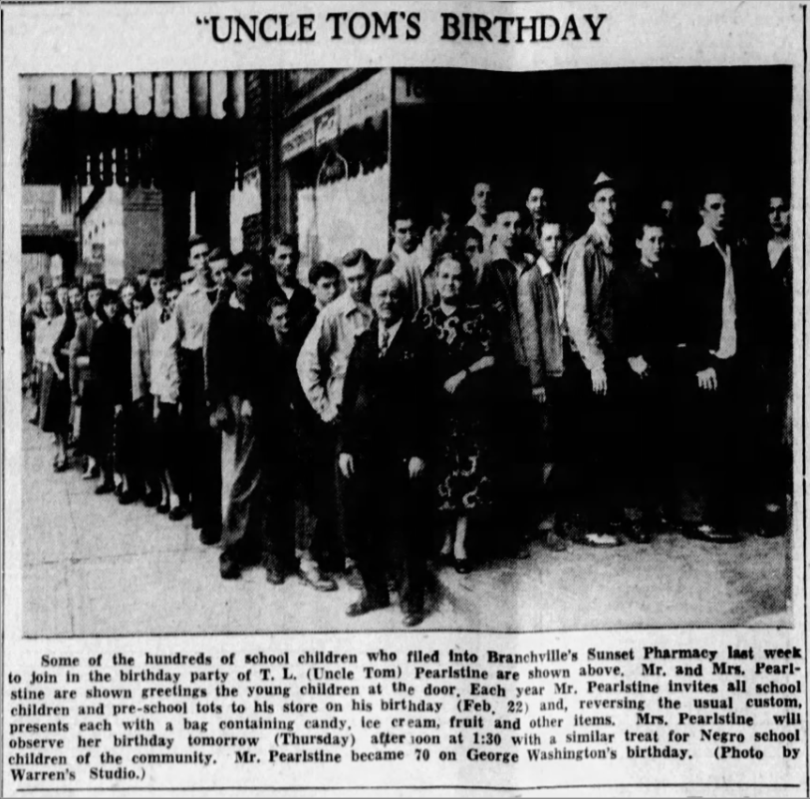 Thomas Louis Pearlstine (1879-1961) was born in Branchville, South Carolina to Charles Louis Pearlstine (1836-1886) and Rebecca Tobish Pearlstine (1845-1917). Thomas lived in Branchville for the first twenty years of his life, helping his mother Rebecca operate Mrs. R. Pearlstine’s and later R. Pearlstine and Sons Company. By 1901, Thomas had set out on his own, moving to Ehrhardt, South Carolina. From 1902 until the mid-1920s, Thomas partnered with R.P. Wolff in the Henry Wolff and Company mercantile firm of Allendale. By 1929, Thomas returned to Branchville, establishing the Sunset Pharmacy on Main Street. His store sold medicinal drugs remedies, perfumes, stationery, toiletries, and candy.  Affectionately called “Uncle Tommie” by his friends, Thomas, and his wife, Fannie Strauss Pearlstine (1879-1968), handed out candy to the town’s children every year on the couple’s birthdays in front of their Main Street store building. In 1954, he sold off his entire store’s stock and retired.

Main Image: Branchvillians lined up outside of Thomas Pearlstine’s Sunset Pharmacy, 1949. Reprinted from the Times and Democrat, March 2, 1949.