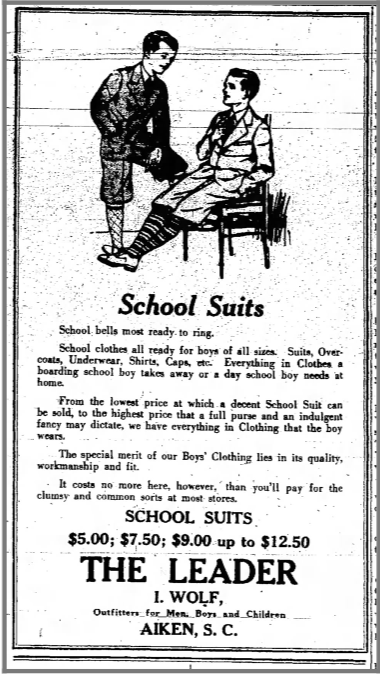 Jacob Wolf (1874-1948) immigrated to the United States from Belarus before the turn of the twentieth century. For a few years, peddling in Graniteville marked Jacob Wolf’s time in his new country. Around 1903, after he had convinced Julia Kamenoff Wolf (1884-1959) to emigrate from White Russia, the two married and settled in Aiken. There, they also motivated other Jewish families, to establish lives. By 1906, he had taken over management of M.S. Polier’s business and three years later Jacob Wolf expanded his business at the Weeks Building (present-day 160 Laurens Street SW) from selling dry goods to include clothing.  Between the 1920s and 1940s, Jacob Wolf’s son Isadore Wolf (1907-1983) assisted in managing the store. In 1929, Jacob Wolf renovated his storefront, adding green tiles spelling his family name on the entryway floor, plate glass, and buff stucco on masonry. Around 1932, Jacob and Isadore Wolf rebranded the business as The Leader and moved the business to 836 Laurens Street (present-day 126 Laurens Street SW). After Jacob Wolf passed in 1948, his son Isadore Wolf (1906-1989) operated the business until his retirement from men’s fashion in 1962.

Main Image: Advertisement for The Leader, 1933. Reprinted from the Aiken Standard, September 6, 1933.

Below Image: Advertisement for The Leader, 1936. Reprinted from the Aiken Standard, September 1, 1936.