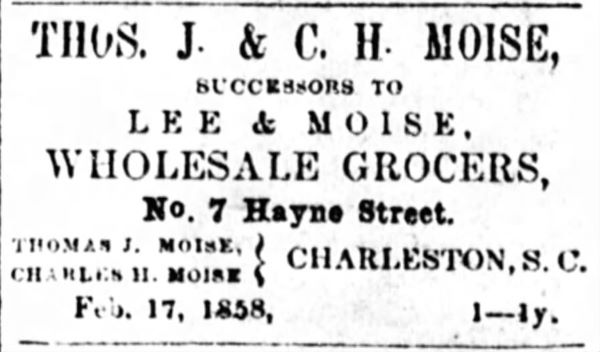 On March 19, 1857, The Charleston Daily Courier announced the retirement of Patrick H. Lee (1816-1865) from his wholesale grocery business at 7 Hayne Street in Charleston, South Carolina, and that his former partners Thomas Jefferson Moise (1826-1869) and Isaac Moise (1800-1857) would take over the business with a new partner, Charles H. Moise (1830-1896). Isaac acted as a special partner in the business—which he invested $15,000 in according to the notice—while Thomas and Charles acted as general partners. Only eight months later, Isaac died. In 1860, the name of the business changed to T.J. and C.H. Moise & Co., which suggests that the Moises recruited additional partners to the business. Thomas and Charles Moise announced the dissolution of their partnership in The Charleston Daily Courier on July 14, 1862.