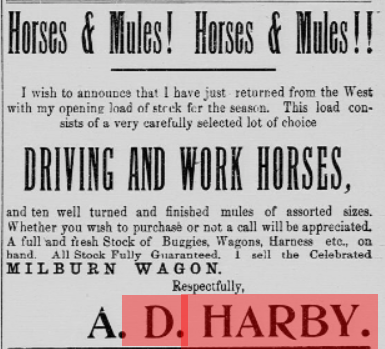 Ansley D. Harby (1876-1941), son of Horace Harby and Emma H. Harby, worked as a salesman for a “reliable sash, door, and blind factory” from 1900 to 1901. From around 1903 to 1908, Harby ran his own business, A. D. Harby, from which he sold horses, mules, wagons, buggies, and harness. In 1908, Harby’s business consolidated with the Booth Live Stock Company, and became the Booth-Harby Live Stock Company. During the late 1910s, Harby dabbled in the real estate business, and later became a salesman for Harby & Co., which sold farm products, buggies, carriages, and livestock. Prior to 1930, Harby moved to Abbeville County, where he owned a farm until his death.

Above: Reprinted from The Watchman and Southron, September 6, 1905