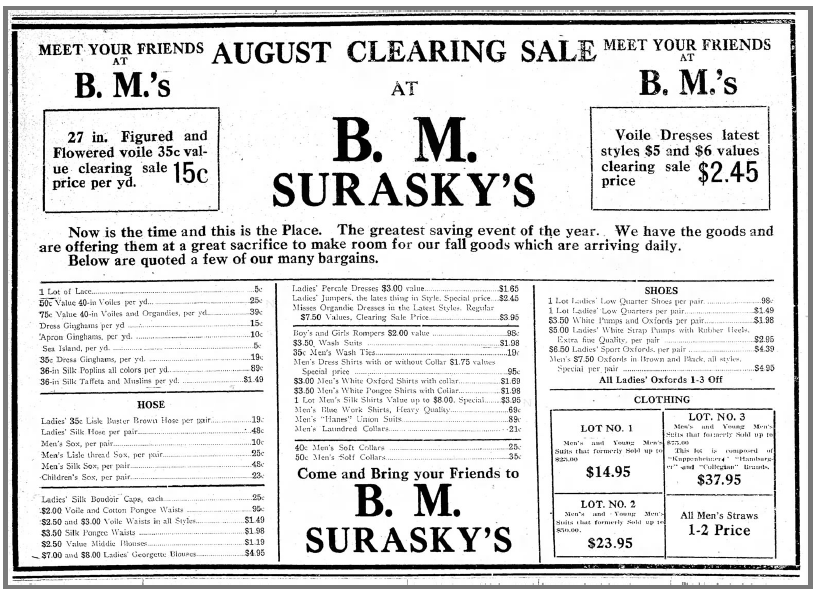 Around 1886, Benedict Morris “B.M.” Surasky  (1862-1934) and his wife, Sarah Anna Polier Surasky, (1864-1959) immigrated to the United States from Knyszyn, Poland. While B.M. Surasky peddled around the Aiken countryside with his brothers in the final years of the nineteenth century, Sarah Anna Polier Surasky gave birth to her and B.M.’s son, Mandle Surasky (1898-1986). During Mandel Surasky’s youth, his father was partnering with his brothers in numerous dry goods businesses on Laurens Street. After ceasing his business relations with his brothers, Mandel Surasky’s father opened B.M. Surasky’s at 842 Laurens Street (present-day 120 Laurens Street SW), in the same building as his previous undertaking. In 1926, B.M. Surasky purchased the Lupo building, the site of his business, for $11,000. B.M. Surasky operated the business with his son Mandel Surasky until his passing in 1931. After his father’s death, Mandel Surasky ran the business until he decided to close the store in 1961.