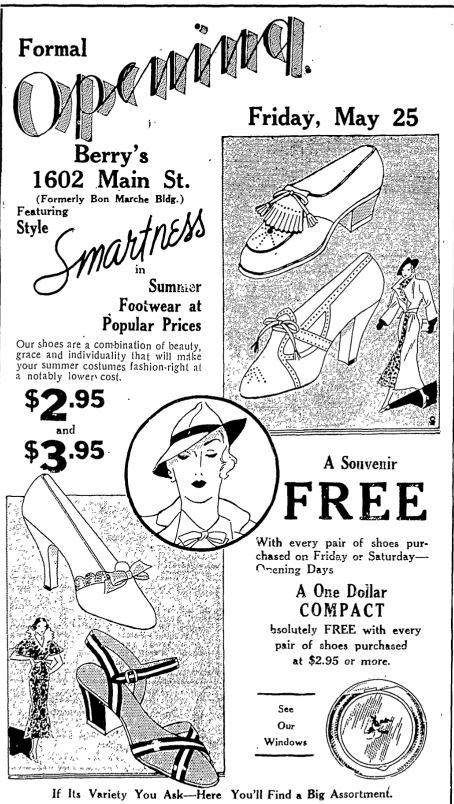 On August 8, 1930, fifteen-year-old Nathan Berry (1915-1993), son of Russian immigrants Barnett Berry (1876-1943) and Annie Levine Berry (1879-1927), opened shoe store Berry’s at 1643 Main Street in Columbia, South Carolina. Completely remodeled for its opening, the store sold “women’s, men’s, boy’s, and children’s footwear,” and included “comfortable wicker chairs” for patrons to sit in while they tried on shoes.1 On January 1, 1932, Berry relocated the store to 1518 Main Street, where it would remain until it moved to 1602 Main Street in 1934. At that point, the store, which by then dealt solely in women’s footwear, became known as Berry’s Slipper Shop. In 1937, Berry relocated the store again, this time to its final home, 1608 Main Street. In 1941, Nathan and his brother Joe B. Berry (1916-1979) remodeled the building at 1608 Main Street and opened Berry’s on Main, which included women’s apparel and ready-to-wear departments in addition to a shoe department. Berry’s Slipper Shop operated under the umbrella of Berry’s on Main until at least 1942.

Main Image: Advertisement for Berry’s Slipper Shop. Reprinted from The Columbia Record, May 24, 1934.