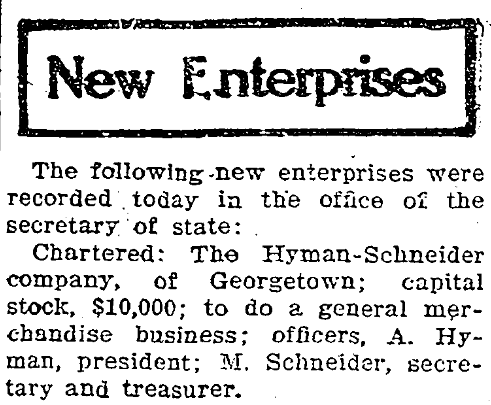 In 1913, his brother-in-law, H.N. Rosen, joined in the management of the dry goods business. Harry Nathan “H.N” Rosen (1883-1961) was born in the Bronx, New York to Isaac Meyer Rosen and Bella Stone Rosen. Around 1910, Rosen had relocated to Georgetown, South Carolina and married Dorothy Lewenthal (1884-1973), a sister of Schneider’s wife. The Schneider-Hyman Company appears to have given way to The New Store by 1914, although the business remained a dry good store through 1920. By 1930, still under The New Store moniker, the Schneider family transitioned into department store goods, including electronics and clothing, while the Rosen family began selling furniture and clothing.

Main Image: Newspaper announcement for the charter of the Hyman-Schneider Co., 1912. Reprinted from The Columbia Record, March 13, 1912.