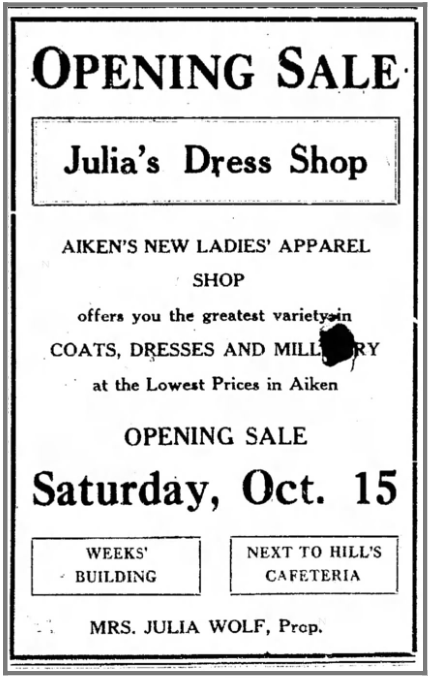 Around 1903, the Kamenoff family, including the future Julia Kamenoff Wolf (1884-1959), immigrated to the United States from Russian-occupied Belarus. Either shortly before or not long after arriving in the United States, Julia married Jacob Wolf (1874-1948). By 1910, the Wolf-Kamenoff family had settled in Aiken and began successfully encouraging other Jewish families, such as the Kaplans, to settle there. For her first two decades in Aiken, Julia Kamenoff Wolf occupied herself as a housekeeper and the mother of their seven children. On October 12, 1932, the Aiken Standard announced the opening sale of Julia’s Dress Shop at 802-804 Laurens Street (present-day 152-160 Laurens Street SW). For nearly the next three decades, Julia operated her women’s clothing store with the help of her children, such as Isadore Wolf (1907-1983) and Rebecca Wolf Karloff (1903-1955). Throughout its existence, Julia’s Dress Shop was the premier women’s fashion outlet for Aiken’s wealthy winter colonists. When Julia Kamenoff Wolf passed away in 1959, her daughter Ida Wolf (1913-1990) took over operation of Julia’s Dress Shop, continuing to serve Aiken with the best of female fashion until her death. Three years later, after more than six decades of serving the Aiken community, Julia’s Dress Shop closed.