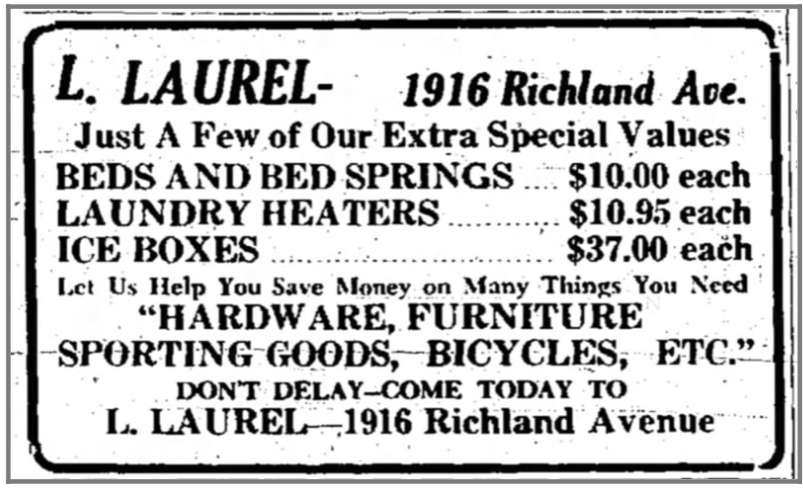 Lazar Laurel (1892-1976) was born to Lasare Lipchitz in Russian-occupied Poland (1892-1976). After fighting in the First World War, Laurel opened a repair shop in Paris, France.  For the next two decades, Laurel lived and worked in France, even attaining French citizenship. During the Nazi occupation of Paris, the Gestapo interrogated Laurel but ultimately decided to release him. Laurel, attributing an American Legion card the Gestapo observed on his person with saving his life, immigrated to the United States in 1942 in search of freedom and better opportunities.

By 1944, Laurel, then settled in Aiken, had established a repair shop on Park Avenue. A year later, he became a naturalized American citizenship and married Dora Ruth Surasky (1904-1980), a local Jewish woman and daughter of Hiram Surasky (1872-1932) and Friedel Copeland Surasky (1876-1959). In 1946, Laurel opened his eponymous hardware store at 1916 Richland Avenue (present-day 316 Richland Avenue W). Under Laurel’s ownership, the store sold a variety of goods including bicycles, beds, and home improvement tools. By the 1970s, Laurel, due to health and age, had begun to seek someone who would buy his business and carry on selling his wares. In 1976, Laurel passed away and his hardware store was sold, becoming Laurel-Pridgen Hardware.