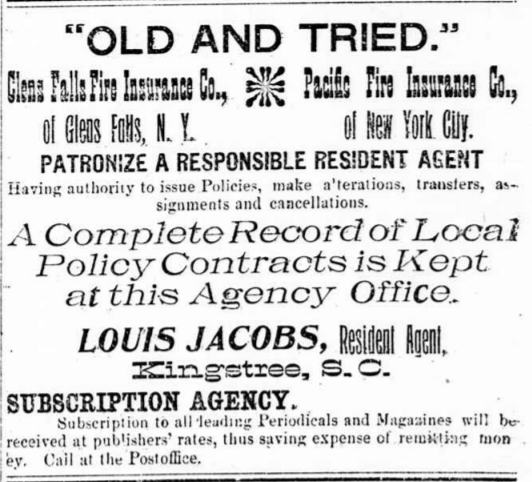 Louis Jacobs (1842-1913) immigrated to the United States from Germany in 1859, landing in Charleston, South Carolina. When the Civil War broke out, Jacobs enlisted as a private in the Confederate Army, and served with the German Volunteers (Charleston), a company attached to Hampton’s Legion. After its arrival in Virginia in 1861, the company was reassigned as artillery, “being thence known as Bachman’s battery, Hampton’s Legion.” During the Battle of Gettysburg, the company sustained heavy losses and subsequently returned to South Carolina to replenish its numbers. Shortly thereafter, it joined Joseph E. Johnston’s army in North Carolina, where it participated in the battles of Averysboro and Bentonville.

After the war, Jacobs moved to Kingstree, South Carolina. There, he worked as a merchant until his appointment as Probate Judge of Williamsburg County in 1870, a position he held until 1876. That year, he was elected Sheriff of Williamsburg County, serving in this position until 1880. He then moved to Charleston, where he worked as chief inspector of customs for the port of Charleston for two years and then as a bookkeeper. In 1895, Jacobs returned to Kingstree, where he worked as a merchant and insurance agent. In 1897, he became Postmaster at Kingstree, a position he held for 16 years.