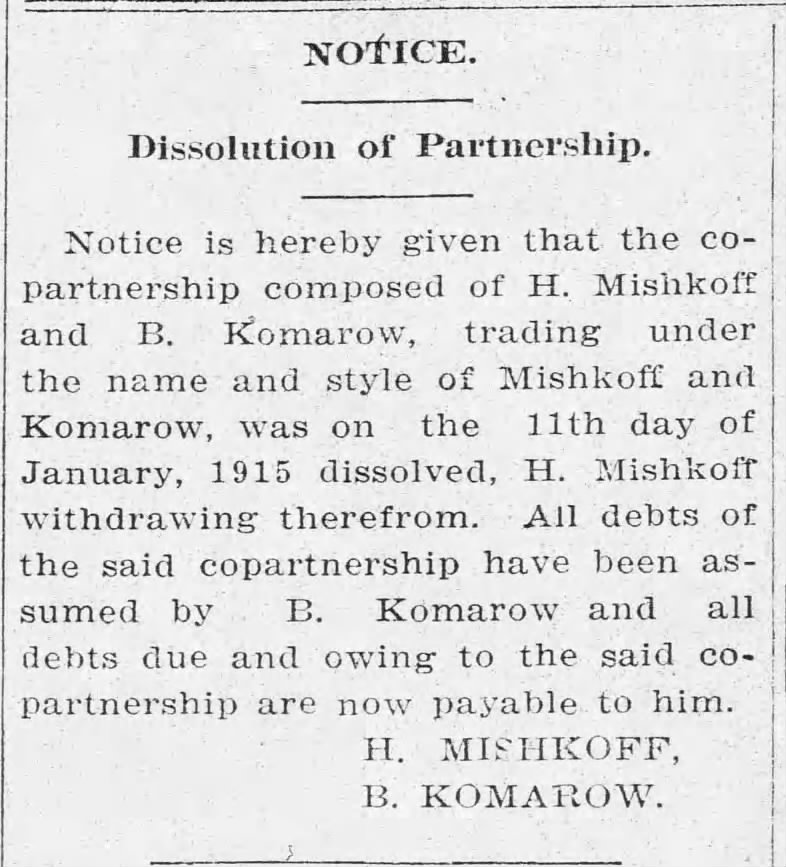 Born in 1881, Henry Mishkoff (1881-1947) lived in Grajewo, Poland until 1904. That year, he traveled to Rotterdam, Netherlands, presumably to escape the brutal treatment he and other Jews faced in the Russian Empire. In Rotterdam, Mishkoff boarded the SS Rotterdam, which made port in New York on November 9, 1904. According to a Declaration of Intent for Naturalization form Mishkoff filed in 1907, he lived at 103 Forsyth Street, New York and worked as a “jobber,” or wholesale merchant. By 1914, he had moved to South Carolina, where his sister Lena (1879-1954) lived with her husband Rabbi David Karesh (1878-1964).

Benjamin Komarow (1890-1957) was born in Odessa, Russia (present-day Odesa, Ukraine). In 1905, he left Odessa for Rotterdam, Netherlands to escape a pogrom that ultimately left over 400 Jews dead and over 1600 Jewish properties destroyed or damaged. In Rotterdam, Komarow boarded the SS Statendam, which made port in New York on March 6, 1906. After he arrived in the United States, Komarow lived with an uncle, Abraham Bradkovsky (died 1909), who owned a restaurant in Manhattan on Monroe Street. Following his uncle’s death, Komarow moved to Leonard Street in Brooklyn, where he boarded with Russian immigrants Morris and Bessie Boardman and worked as a pants tailor. In 1911, he married Morris’s relative Rebecca Boardman (1893-1961). They lived together at 79 Leonard Street in Brooklyn until they moved to Sumter, South Carolina in 1912.

Around 1914, Mishkoff and Komarow opened Mishkoff & Komarow at 36 South Main Street in Sumter, South Carolina, where they sold clothes, boots, shoes, and dry goods. By January 1915, however, they agreed to dissolve their partnership, with Komarow assuming all debts incurred by and due to the business. Mishkoff then moved back to New York, where he married Annie Glassberg (1887-1954) in 1916. They had three children together. After his arrival in New York, Mishkoff opened a retail dry goods business. By 1925, however, he became a partner in a glass/mirror business, which he was involved with until the 1940s.

Komarow remained in Sumter through at least March 1917, operating a store at 36 South Main Street. By 1919, however, he had moved twenty miles south to Manning, South Carolina, where he managed Solomon L. Krasnoff’s (1874-1936) clothing and shoe store The Battery. By 1921, he became the proprietor of dry goods and clothing store The Peoples Store. By 1924, Komarow, his wife, and their four children had moved back to Brooklyn, where Komarow opened his own general merchandise store. Above: Advertisement placed in newspaper by Komarow after Mishkoff & Komarow dissolved. Reprinted from The Item (Sumter, South Carolina), February 12, 1915.