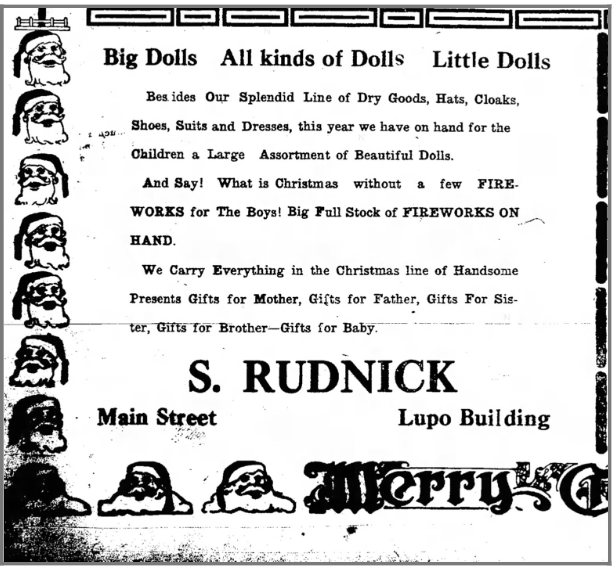 As an infant in 1890, Morris Rudnick (1889-1943) immigrated with his family from Tiekten, Russia to the United States. By 1911, Morris had settled in Aiken and formed a partnership with George Payeff (1886-1960) called Famous Bargain Store. Unfortunately, the business was forced into bankruptcy. With credit extended from the Rubin family of Columbia, Morris Rudnick was able to start up a new enterprise. Throughout the 1910s and 1920s, Morris Rudnick conducted business variably under the names M. Rudnick and S. Rudnick (presumably after his wife, Sophie Halpern Rudnick (1886-1965). In late May 1919, under the name S. Rudnick, Morris Rudnick purchased the Lupo Building for $10,000 (an advertisement from 1922 places M. Rudnick in the Lupo Building, demonstrating that S. Rudnick and L. Rudnick, in this case, were the same person). In July 1922, S. Rudnick purchased for $6,500 a profitable wooden stand on Laurens Street previously used by Carrol’s barber shop. Morris Rudnick occupied himself in general retail until around 1928 when he announced that henceforth his mercantile focus would be on furniture.