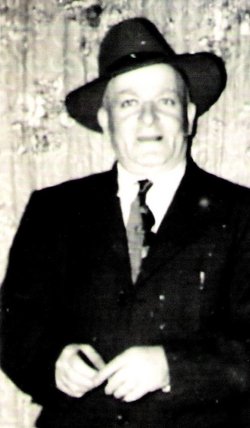 Robert Moskow (an anglicized form of Ruvin Smusin) (1893-1965) was born in Russia to Shmuel Labe Smusin, who raised horses for the Czar, and Kayla Dinyeh Kroik. Around 1905, the family decided to move their family to the United States, in part to avoid their sons’ conscription into the Russian army. After they arrived in New York City, Robert Moskow worked at a lye factory for a short time, before going to work as a packer for dry goods store H. B. Clafflin & Company for almost a year. While at H. B. Clafflin, Moskow met John Heinemann (1872-1922), a southern merchant who agreed to take him South. The pair settled in Andrews, South Carolina, where Robert worked in Heinemann’s dry goods store and attended high school. After Heinemann retired and sold his store, Moskow ran a few small shops until he joined H. Brody & Sons in Sumter, South Carolina. In 1934, he returned to Andrews and opened his own business, Moskow’s Department Store. After Moskow’s death in 1965, his wife, Eva Cox Moskow (1899-1986) ran the store before she sold it around 1971.