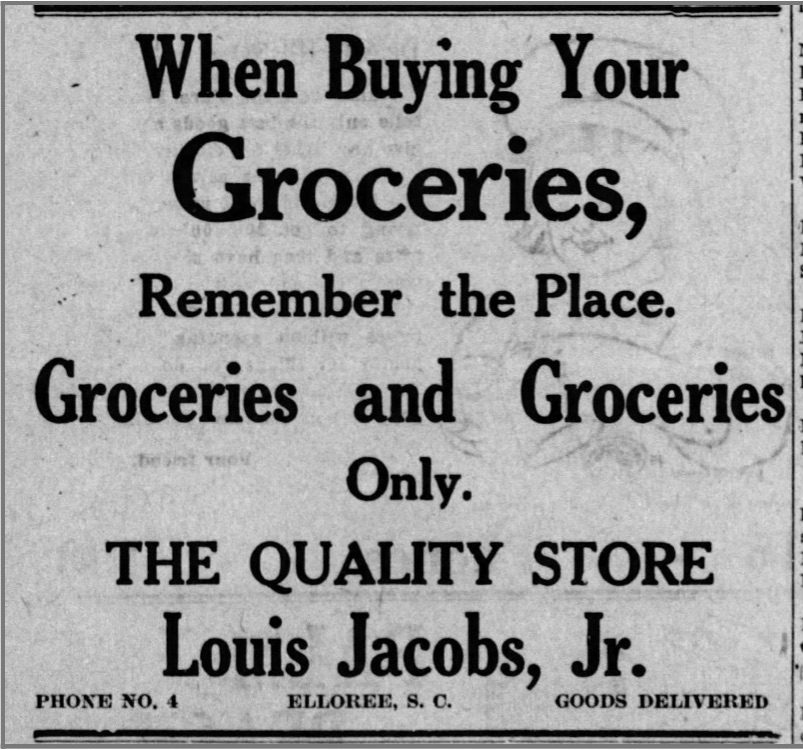 Louis Jacobs, Jr. (1878-1937) was born in Kingstree, South Carolina to Louis Jacobs, Sr. (1842-1912) and Mary Fredrika Gewinner Jacobs (1850-1913), both immigrants from Germany. The elder Jacobs had quickly risen to prominence in his adopted country, being elected probate judge, sheriff, chief customs inspector, and postmaster. By 1900, the younger Jacobs had moved to Charleston with his older brother, Julian (born 1873), where the two were first employed as clerks and later salesmen in wholesale grocery and dry goods stores, respectively. By 1913, Louis Jacobs, Jr. had moved to Elloree, South Carolina where he ran a grocery, The Quality Store, in the 1910s and 1920s. By 1930, Jacobs had shifted his business interests from selling groceries to selling timber and lumber. In the early 1930s, following the death of his wife, Frankie Brock Jacobs (1888-1932), he. moved to Kingstree to live with his sister, Etta Jacobs. In 1937, Louis Jacobs, Jr. passed away in Kingstree.

Main Image: Advertisement for The Quality Store. Reprinted from the Times and Democrat, May 7, 1914. Above Image: Advertisement for Jacob’s Quality Store. Reprinted from the Times and Democrat, November 13, 1913.